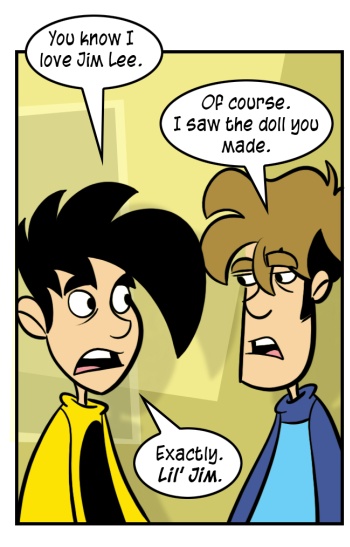 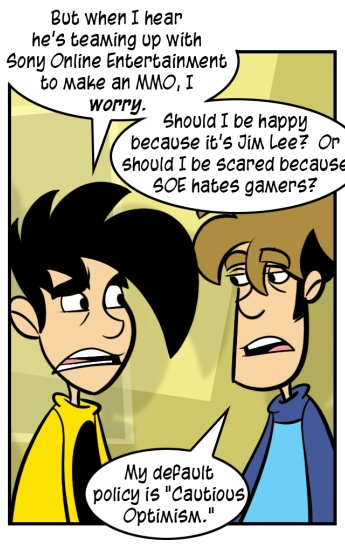 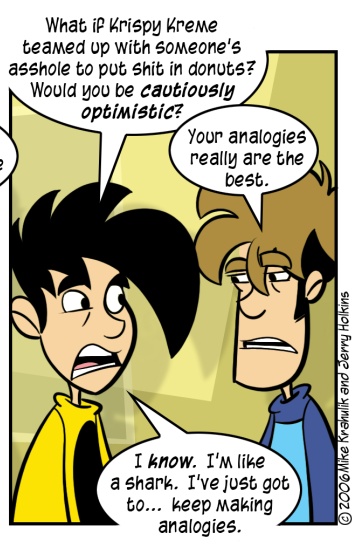 I can read an entire comic book without really looking at the art. This is a process that horrifies Gabriel - imagine his eyes growing wider as, with each swift turn of the page, his craft is obliterated. By contrast, my cohort holds strong opinions on the topic of visual stimuli. I imagine this is part of the reason we're able to maintain our chaste union: like the gods of old, we keep to our dominions.

I gather that "Jim Lee" is something of a "man about town" in the world of... drawing things, whatever their people call it. I'm told that young aspirants to the comic arts must traverse a Jim Lee Phase before they emerge from Plagiara - "The Valley Of The Shadow Of Theft," tempered thus by his iconic renderings.  I have seen pictures that he has drawn, and I was able to tell which ones were and which ones were not Batman.  That's pretty much all I'm looking for.

How Gabriel must have suffered, how it burned to hear that his one-time idol had joined forces with Sony Online Entertainment, his gravest enemy. I don't know how to describe his expression.

I might say that the news strangled his heart.

I might also say that if you managed to screw up a Star Wars MMO, then for fuck's sake maybe you don't get any more major franchises.

Chris Kohler (author of "Power Up," among other things) had a chance to see Elder Scrolls IV: Oblivion during what was probably the last big media push, with a product that is probably very similar to the final version. He came back with a slightly different story than many others did, or at any rate a different emphasis - presenting in direct language his issues with geometry pop-in and so forth. With all the talk of shills that has gone on lately, this seemed like an instructive exercise.

Check the comment thread over there, if you like, and recall that more often than not we as gamers do that sort of work for free.

ask yourself a question