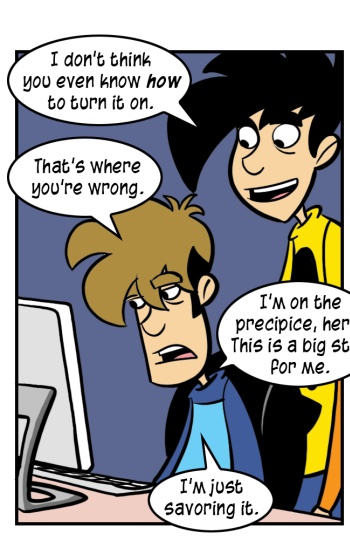 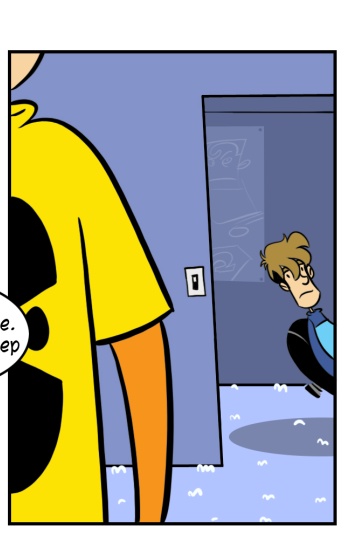 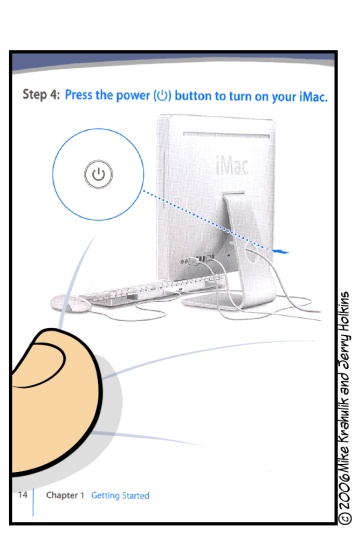 I'd never used one of the new iMacs before I bought it, and though we've added dialogue here to grease the wheels I thought Apple Enthusiasts might be amused to know that I spent almost five entire minutes trying to turn it on.

On Friday I described the PC using a patented "wilderness terminology," and I wanted to expand on that thought somewhat. I don't think that every PC user is locked into some kind of self-abusive cycle. I think that for most PC users, particularly gamers with no genuine recourse, their "choice" of platform isn't really what you'd call an act of volition. It's the default. I mean, right? It's what emerges from the tap. All we ask is that it be wet.

In this, it does not disappoint.

The frontier I spoke about, largely a memory now for most of us, has moved on: there are men who abide in those frozen steppes, and their banner is the penguin. I used to "camp" with my cousin in his backyard, we would tie a tarp over a picnic table and in the morning my auntie Shoko ("Sho-chan") would bring us French Toast. Certainly, there are exceptions. But Windows these days represents roughly that level of "hard livin'."

There was a period where I did cleave to Windows as a platform, and it was largely as a response. Even when an Apple product set my loins ablaze, their marketing message always steeled my resolve against them. Assuming their "Megahertz Myth" methodology was ever sound, it became less so as PC processors began to skyrocket in speed and performance. Nevermind that AMD used largely the same message, it was about not liking Apple and I became very good at it. What I have come to realize is that even an unctuous, sometimes deceptive clock is still right twice a day. They've made an unbelievably transparent computing experience that I actually look forward to. Their willingness to just slough off the antique parts of the platform, though no doubt turbulent for the faithful, have allowed them to package the most genuinely modern computing product on the market.

I said that I would discuss Metroid: Hunters, and I will, but if you're interested in nut slash bolt information, I'd recommend you check out Jeremy's write-up here. I'm not very good at making previews, I'm afraid - but I can tell you if a game is fun or not. This one is. If you would like to know how it plays, cast your consciousness backward in time, and imagine this alteration to the world you know: that Nintendo approached id Software in 1994 with the rights to Metroid. Instead of Quake, with its mushmouth dimension hops and nonsense, Samus Aran and a catalog of rival bounty hunters put that technology showcase through its paces.

When I say the game isn't very Nintendo, this is what I mean: it is a balls-out paean to skill-based, PC deathmatch. I don't understand what it is doing on the DS. No auto-aim, no lock-on. It is not a party game tarted up with go karts or some shit. You do not bury fruit in Metroid: Hunters. It is, for some reason, a portable, online capable shooter on Nintendo's defiant, two screen mutant handheld. The real alteration to the old formula is the addition of "alt modes," like Samus' morph ball. Every character has an alternate form with its own (sometimes) strange function: laser tripmines, a turret, all kinds of weird crap.

If you have played any Mario Kart DS, you know that it can be difficult to settle on a hand position that is not excruciating after awhile. You may find that here as well, at least initially. There are several control options you can use, and settings to tune them further. The one I settled on was called "Dual Mode," one that features no stylus input: the four button quad on your right handles all look functions. It works surprisingly well. It's not what I think of when I picture the DS, and the sometimes unorthodox gamers that are drawn to the system don't seem like a good match for an unapologetic FPS experience. The renaissance gamer for whom the DS is part of a larger collection may well find something to adore.

but they don't go anywhere