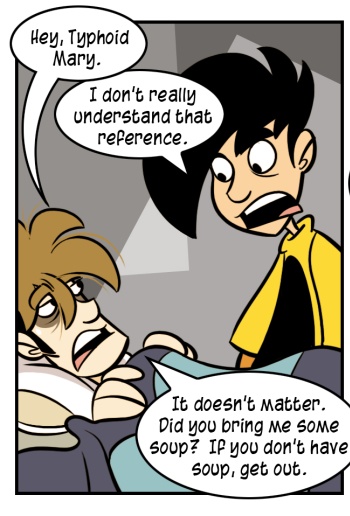 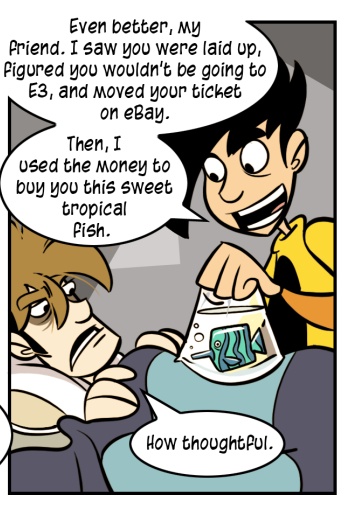 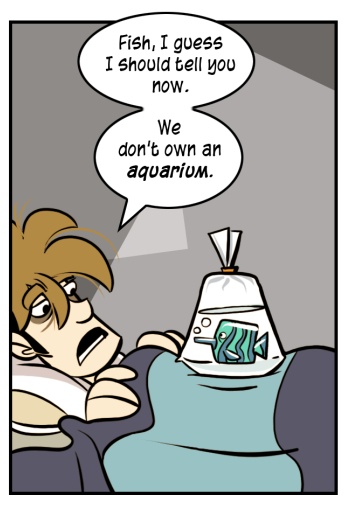 I often end up catching whatever pox Gabriel drags into the office, foul, unstoppable creatures he contracts from his heir, who gets the disease initially from a puddle of sewage (rich and raw) that stagnates in the "Kidz Room" of the gym. I may even be impressed by his latest acquisition, which was symptomatic by lunchtime and then, by midnight, caused an arm to grow from my sternum. The arm moves of its own accord, with its own needs and desires.

In any event, extremely sick. Not so sick, never so sick that I would pass on E3, but still. You know? Ill. Of course I'm very excited to get a hint of what will dominate my leisure hours for years to come. But, and here is a unique piece of trivia, this will be the first opportunity I've had to sleep all night in over five months. Right now it seems almost impossible, like pyrokinesis or unaided human flight.

We're used to news and releases slowing to a crawl near the swirling eye of E3, and while the releases have largely maintained their traditional doldrum, we are basically simmering in information. An episodic Alone in the Dark? I wonder if Jack Wall composed that score - it certainly sounds like it. A new Rayman for the Nintendo Revolution (among others)? All kinds of shit. A-10 Warthogs? I mean, come on.

We mentioned in a recent podcast that Microsoft and others are preparing much more elaborate venues for their promotional materials, something that makes a tremendous amount of sense. You've really got to wonder how the major publishers feel about it when their high-resolution marketing materials get locked behind queues and subsciption based services. In the case of Microsoft, they have the ability to create something far more elaborate than their competitors, simply because their next-generation platform is, well, out: take a look at The Gamerscore Blog, itself an internal content channel, to see just what they have in store. The importance of playable E3 demos for non-press is something you shouldn't minimize. Those E3 playables end up on coverdiscs months to even a year out, with identical gameplay and assets. Yes, as fun as it is to purchase their advertising payload, I would love to call that era over.

No podcast today, I'm afraid. As much as we love doing them, they really aren't compatible with the way we work - at least, a set schedule for them isn't. There'll still be casts from time to time, so it's probably worth leaving the sub in your aggregator. We lucked out several weeks in a row with great Tuesday news, which makes for a cast worth listening to, but the last two times we've tried to knuckle down for a recording session it's produced unlistenable trash. Super fun experiment, clearly it's something that humans want, but bear with us while we try to figure out where they fit into real life.

Hawk (who, in moments of weakness, I have referred to as "Hizawk") has dropped a couple videos of himself coloring with his Cintiq on YouTube. I believe this is a part of an intense campaign to get Gabe onto one of these things, at which point they'll be Art Brothers or they'll train baby monsters or some shit.