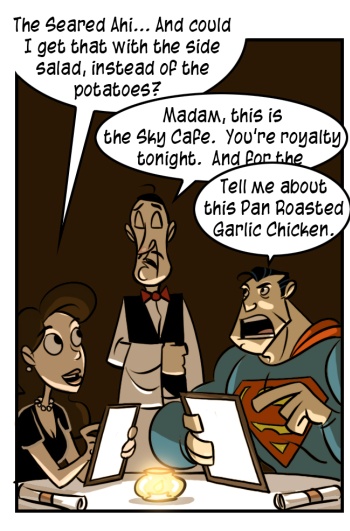 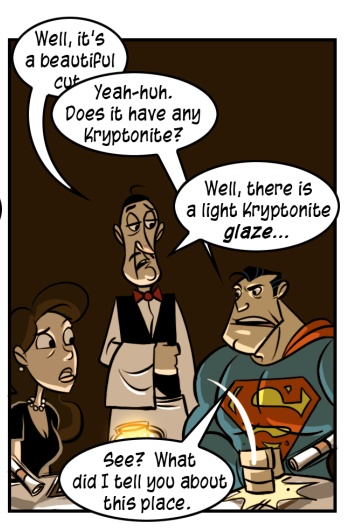 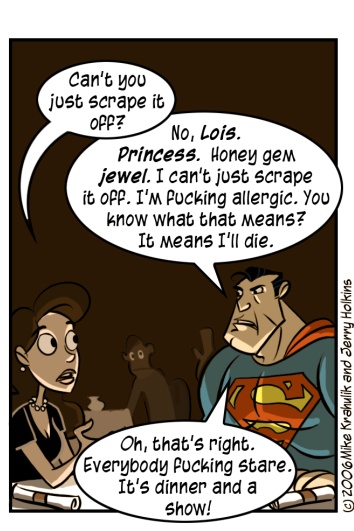 We're going to be out of town next week, both of us, on "vacation." We're going to roughly the same place but we have no desire to see one another. During this time, I have secured the services of a kind of all-star developer supergroup, like a Menudo versed in Maya, to handle the newspost portions while our third-grade comic trainees have agreed to handle the strip. At some point during this week a viewing of Superman Returns is veritably assured. It is running at an exceptionally comfortable theater near my house, but beginning at nine o'clock each night I have a standing agreement to interfere with (virtual) terrorism. I don't know how grave the threat actually is from these simulated miscreants, but I must admit that the process does make me feel better.

Ah, yes! We have produced another comic strip. They appear to be eating at the restaurant in the Space Needle, and no, we don't know exactly why. I've never been there myself, and the idea of a spinning restaurant hundreds of feet off the ground somehow seems incompatible with the consumption of food.

It would have been a very long time ago, but I mentioned a mod called Natural Selection because I found it amazing. A completely asymmetrical strategy FPS with a strong Aliens theme, it had coalesced somehow from my intense desire. I was overjoyed to learn that they were moving the modification to Source, as the only substantial complaint I had with the game was that - as good as it looked - I was sick to death of looking at the Half-Life engine.

At that point, I took my leave of the game and its community and started really investing in me. I was spending a lot of time in the Gymnasium, doing  pumps on the weighting bench. I learned to ski without skis. I installed an RFID in my penis, which literally lets me start the Prius with my dick.

While I was thus engaged, the NS:Source project was under assault from Hackzors and also from reality, money be tight, and the game's director cooked up a novel solution: make a game. Not the same game, not the big super complex asymmetrical future action guy game, but one of those casual affairs we sometimes think of as not being proper games at all. He cooked up this "Zen of Sudoku" product to keep the rest of the affair in the black, which I thought was interesting - he goes into the whys and wherefores on his blog.

It isn't that weird on the face of it - every developer is making games to fund the next game to fund the next game. It's the cycle of madness at the core of the industry and it is how men are destroyed - but dipping into a radically different space to fund your hardcore game was interesting. If it succeeds, and I don't have the power to make it so or the foresight to declare such a thing, but if it succeeds I wonder what lesson they'll learn from it. I had a chance to talk to a couple GarageGames guys at the last E3, these are men who survived the devastating cycle I described above and still live to tell the tale, and I brought up that Tribes tech demo they had cooked up before. It turns out that they enjoy slash prefer making games that can be

- finished in a reasonable amount of time

- sold for a reasonable price,

and they aren't really interested in bulking up for another "Triple A" retail title just so they can go insane making it. They like making small games. They are actively trying to avoid the "industry's" man-eater machinery. They made the casual realm I had considered some shameful adjunct to "real" gaming sound like a tropical paradise by comparison.