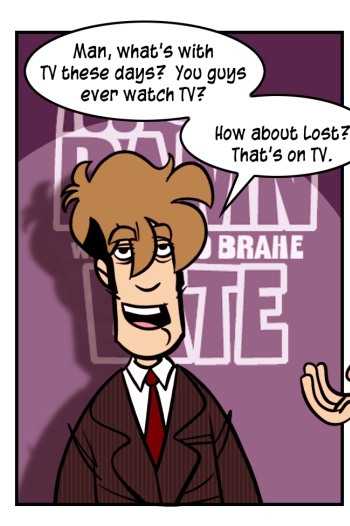 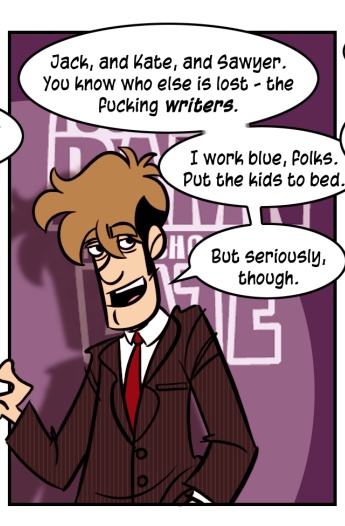 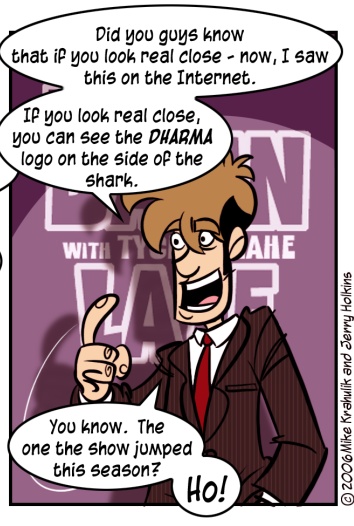 I'm acting as Gabe's proxy in this strip - essentially, he's "broken up" with Lost. It's complicated by the fact that he holds weekly "Lost Nights," where Lost-themed snacks are sometimes offered, but he's come to conclusion that there's no story actually being told. He no longer believes that events are happening according to some overarching plan. Watching the show now is apparently awful, because where he once perceived a carefully revealed structure he now just sees a couple guys out back beneath a tarp, flashlights held under the chin.

Listening intently to his grievances, it sounded to me like a kind of classic Snipe Hunt scenario, where your dad (or troop leader, or some other bastard) might haul you and your friends into the woods to seek out imaginary birds. A stone might be thrown while you are not looking, and the sound that results is attributed to the Snipe; or, if nothing is heard, this too is construed to be sure evidence of Snipe Activity.

The most recent update to the 360's operating system has come and gone, and though there are grim, poorly sourced reports of the software "bricking" people's systems (it must be said: at really the worst possible time) I have emerged from the process unscathed. There are a few items that are handy - disabling notifications while watching a DVD strikes me as especially welcome - but it also represents Microsoft's salvo in their ongoing 1080p HD pissing match with Sony. I can't display this crucial battleground resolution. I wonder how many people can.

The part of this update that I've devoted my mind to has been the video streaming - either from the upcoming Vista operating system or Windows Media Player 11. You probably heard (as I did) that this update might include support for Divx/Xvid, and you may have been disappointed by the lack of this support - but Microsoft can never, never, never, never, never fucking ever be seen to support or, by omission of action allow support for piracy. I understand that there is a petition! You might as well petition to change the atomic weight of molybdenum. If you find the physical universe cold and unyielding, just think about the decrepit ghouls that operate Hollywood. We've simply got to hold out until clever men and women can cook us up a solution, perhaps similar to the one Media Center owners have been using - something that just hooks into the way they do things and affords them deniability.

.WMV is really not the lingua franca of Internet content, but it is spoken fluently by every gaming news site, and I had a great test all lined up for you to check out the feature. I was going to direct you to some unbelievable multiplayer videos of Gears of War, perhaps the most powerful example yet of why this thing will be spinning up in millions of trays later this month, but they were on GameTrailers and now they're gone. They had twelve High Definition, direct feed clips - showing entire rounds! - that must have been from the recent Gears event back east. Why they were commanded to remove them is beyond me. I'm sick of reading and hearing about the Goddamn thing, and these forbidden clips turned something that had become a duty purchase into a thing that I yearn for physically.

Picking up my Neverwinter 2 today - it took awhile for the community to come to a boil on the first one, here's hoping that proud order can migrate to the new "digs" with their fervor intact. Also, seriously considering Killzone: Liberation for the PSP - there is a super fascinating, fully four point disparity between IGN and 1up's review scores. I don't invest myself personally in a site's vague, inarticulate numerals unless I have firsthand experience to the contrary - but I do make it my business to seriously investigate statistical anomalies. The last time I saw numbers this at odds was Chromehounds, and Chromehounds is one of the most fascinating games this year.

I don't especially care why people rate things at the extremes, only that they were driven to do it. Whenever the review apparatus returns this type of data, it often represents the type of noble failure that I find so appealing.

as violins fill with water