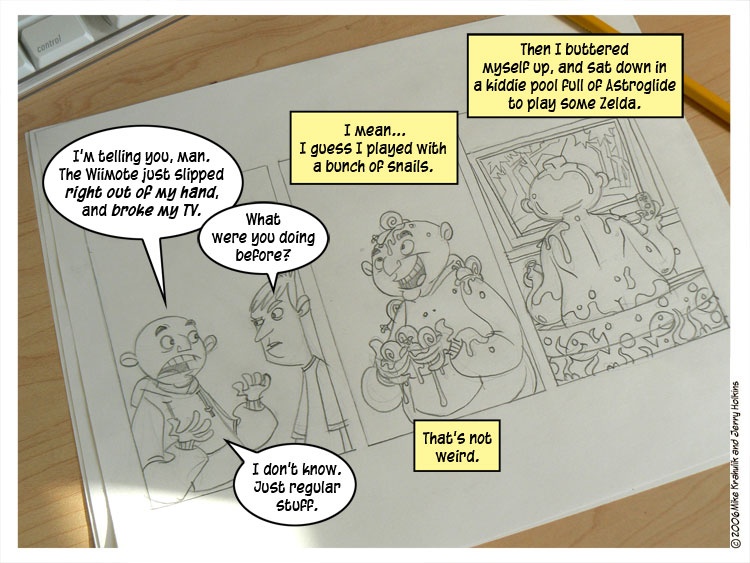 (The weather here is pretty screwed up, slush and ice (with a chance of late afternoon blood) which kept us both home today.  In Spokane, there would be gravel out and other public safety measures, but when snow falls over on this side of the state people don't see it as weather, it's seen as a portent - evidence of an angry pantheon.  A single snowflake will fall on their windshield, and they will immediately swerve their SUV into a truck hauling fuel.  Faced with miles of ice and idiots between his home and work (and a reported eight hour commute), Gabe chose to hole up in Fort Krahulik, which means no tablet and no scanner.  I really like the result.)

You are probably aware that we wholly endorse the "true movement" school of Wii play. We have put these powerful techniques to work in our own homes, in the service of greater enjoyment and increased verisimilitude. However, we continue to be astonished by reports of property destruction and personal injury, wondering precisely what sort of acts might have presaged these costly anomalies. We are not without our theories.

Nintendo has countered this behavior with a friendly and informative online brochure, whose bipartite wisdom can be expressed as

1. Hold On To The Controller,

2. Do Not Let It Go, respectively.

It may be that I am glib because I have no fear of this outcome. This is possibly because my elaborate "screen" is not an expensive plasma - rather, it is a piece of wood I bought at a cabinetry shop for thirty dollars, a surface which quietly receives the signal from a projector I got on sale. Fears are no doubt further allayed by my tight grip on the controller, which calls to mind the implacable grip of the rapper upon his micaphone.

For those of your out New York way, specifically those of you who exceed twenty-one years of age, don't forget Fünde Razor - the annual Guitar Hero event at Brooklyn's Barcade, in support of Child's Play. I've known Joel (who runs the thing) a couple years now, and he's good people. Plus, it's basically playing Guitar Hero and Drinking, which (as I believe I suggested last year) is something that might have taken up your Wednesday regardless.

Last thing: PopCap just (digitally) delivered Bookworm Adventures, which combines its predecessor's sort of "Boggle" meets "Tetris" stylings with an RPG context. No, for real! You deal damage based on the length of your word. There's a rich universe of potential puns there that I have (tastefully) chosen to decline.

i'm not proud of what i do