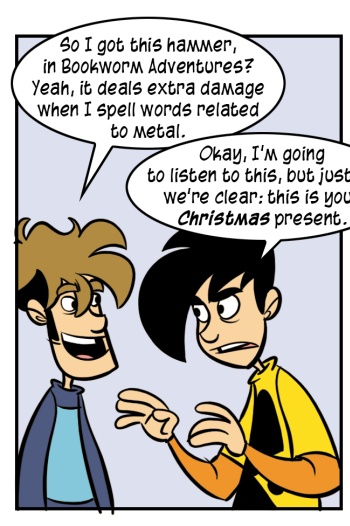 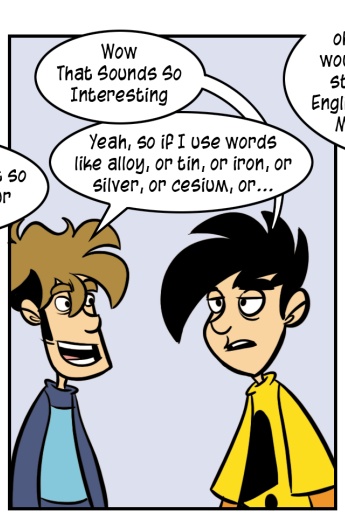 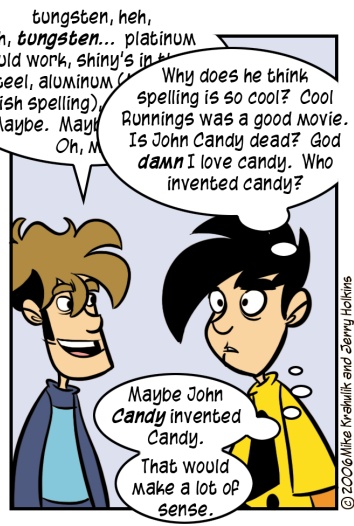 I've tormented my cohort with it, and now I will torture the readership: Bookworm Adventures is linguaphile crack, and games with much larger budgets have been losing to it daily since its release. Describing my cavern of amassed lexical artifacts might take weeks, but let me say that the collection is so comprehensive, so robust, and so well-organized that I'm thinking about charging admission.

Essentially a kind of Scrabble RPG, this thing is a Goddamn vampire and I can't escape its clutches. I don't want to have the sort of conversations with people that we describe in the comic, but I can't help it. It's like a "gear" that my mind gets stuck in. When I fish something like this

out of a pile of random letters, I must say, I think I could create a galaxy if I really wanted to.

Rainbow Six remains our nightly diversion, and we've got a gallery of dependable opponents we can rely on for quick invites to fill out a game. While we're enjoying it quite a lot, there's a fairly serious technical issue that I feel a responsibility to accentuate. There are things that I wish worked differently, but they work: dedicated server support exists, for example, but this support is not complete enough to be of any real use. That is inconvenient. But it is not broken.

It is often the case that players will simply "drop out" of voice communication, and if they dropped out for every person on the team that would be one thing. What actually happens is that a person will drop out for one or two people, while the rest of the server hears them beautifully. You run into situations where you need to act as the relay between two friends who can't hear one another, which is an "inconvenience" when armed soldiers are on the prowl. We call that sort of thing bullshit around here, but we are a cadre of coarse, rugged men who often prefer the company of wild creatures.

The same thing would happen when we were playing Gears from time to time. We've been playing multiplayer games since the system launched, and we've never seen issues of this type. Is it some dark legacy of the Fall Update? Poking through the R6 forum, it looks like this and the Face Mapping bug are both slated for a future patch... with no timeline established. I wonder: will they resolve these issues before I quit in frustration? Let's call it a race.

We've standardized on Friday for updates to the Child's Play site - so, every Friday, you'll be able to able to hit the site and watch the bar "level up." We'll try to make it less ethereal - we always ask the hospitals for pictures, but they are hard at work every minute of the day in the service of mercy. When it was just one hospital and everything was in Gabe's garage, it was much easier to chronicle what was happening. Now - with hospitals dotting the globe, and with toys delivered directly instead of hoarded somewhere - it's more difficult to communicate the progress. It's made it look like there is no progress, when in fact it has been substantial.

We currently stand at two-hundred and sixty thousand dollars in donated toys, games, and cash. Your application for sainthood is in the mail.

will i always be here