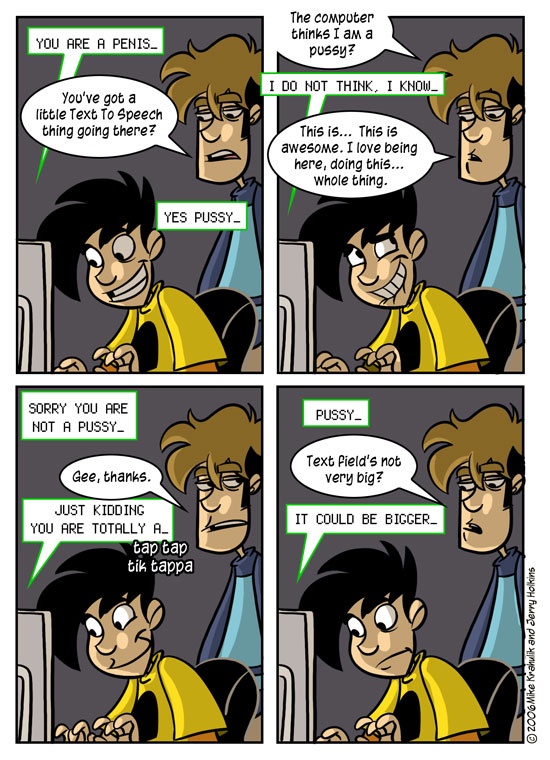 We talked with the GameSHOUT croo about Child's Play yesterday, a process that required we install Ventrilo. I understand that Ventrilo use among the young has reached troubling levels, but as devotees of Battlefield Commander (and then Sidewinder GameVoice) who migrated to TeamSpeak, we never dabbled in your Roger Wilcos et. al.

Ventrilo offers a feature that will pronounce your name phonetically, but of course these sounds need not be a human name, a loophole which Gabriel proceeded to abuse for forty minutes or more. Even I - I who have projected the harrowing image of a velociraptor rapist into the public consciousness - would not feel entirely comfortable revealing the extent of his synthesized content. Acts whose depravity projected into the ultralewd spectrum. Fluids whose origin and purpose were heretofore unknown.

When you start using a Macintosh, you become aware of things Mac users take for granted - things like Quicksilver, or Transmit. CandyBar, too. I started visiting The Icon Factory shortly after I betrayed the PC platform, though their products are also available for Windows. They've done a bunch of things you would probably recognize - the tasteful icons for Windows XP and the 360 are both their handiwork. In any event.

I am constantly trying to push diagrams into the strip, iconic representations, and while it's not something we really argue about it's something Gabriel rarely indulges me in. The Icon Factory put up a Flickr Set of a "Wii Safety Guide" that I keep returning to. You might have seen it already, but I couldn't take that chance.

I linked a few other recently, ones detailing the creation of custom Guitar Hero instruments. I was not familiar with Toolmonger before this year's Fünde Razor, but it's fascinating to hear people discuss something I'm generally doesn't interest me in a way that makes me share their enthusiasm. They created an epic blog post alongside the construction process (which actually began as a destruction process), something you might really enjoy reading.

for his blanket warm