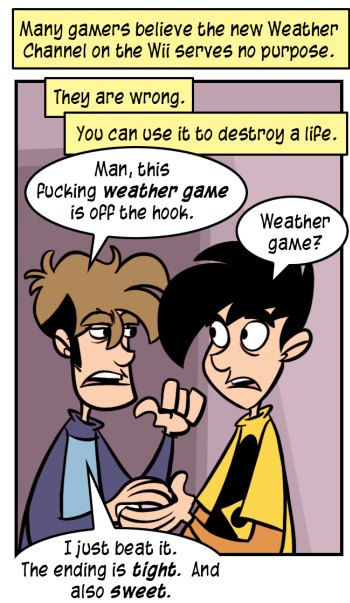 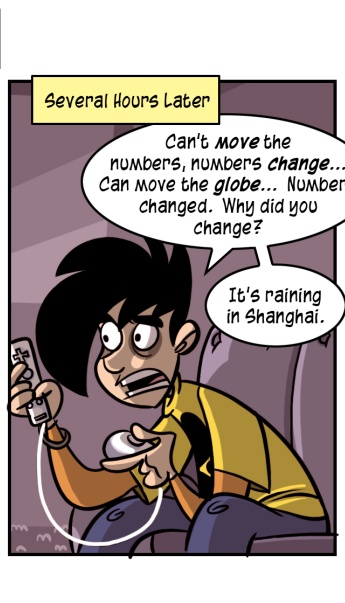 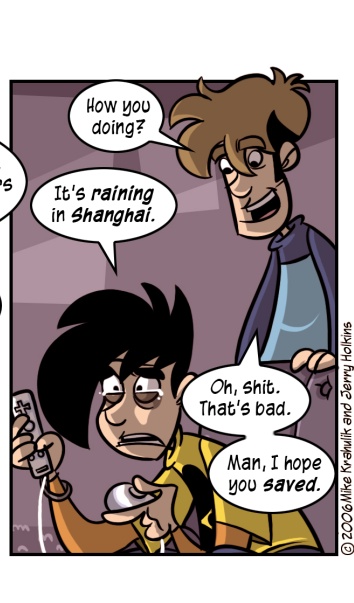 The Wii's Forecast Channel just debuted, with the Internet Channel (i.e., Opera for Devices) arriving later this week - treats for that new or even lapsed gamer referenced by Nintendo marketing materials. I know instinctively that this person does exist, but that's all I know. I don't know if the Wii is a draw for that person long term, I don't know if there's a strong current of titles to maintain that person's interest... To be honest, I don't even know if a constant stream of content is as important to these shy, mysterious creatures as it is to us. I can tell you that the Forecast channel does have merit, even to the hardcore, but one must be creative in its application.

Things I Should Have Brought Up, Or Meant To, But Didn't (For Whatever Reason)

- The most recent backwards compatibility update for the 360 had some surprises up ins, with the fan favorite Psychonauts finally receiving the treatment. More surprising (at least, for me) was the addition of the most recent Splinter Cell for the earlier platform. That's typically not how it works, as the frequently disappointed 360 owner is well aware. I imagine that much of the work was already complete, as BC already supports the earlier Chaos Theory. Still, it's much appreciated: I've been curious about Double Agent's much expanded cooperative campaign, and with the old Xbox yanked out of the cabinet by the roots playing it would have been a gigantic pain in the ass.

- I do not consider myself a "Dragon Quest Man," though I have no quarrel with dragons themselves or the quests one might associate with them. But even as someone who is largely a stranger to the series, I recognize that the next Dragon Quest installment shifting to a portable is a big Goddamn deal. For a "nerd's eye view" of Japanese gaming trends I typically rely on Jeremy Parish and Chris Kohler's insights, as they were probably playing earlier Dragon Warrior games when I was playing Wasteland or The Bard's Tale. They both accentuated the tectonic nature of the shift with more context than I could.

- I received a terrifying email from my Internet Service Provider a couple days ago. When I had Cable, I would often receive mails admonishing me for going over some kind of imaginary data limit, a heinous act of criminality which is also called "using the service." I decided to switch to Speakeasy primarily so the mail I received would be less terrifying. It was not. This was (in fact) a mail telling me not only that I should refrain from downloading episodes of Battlestar Galactica (specifically, episodes eight and nine) but that I should also make use of NBC's convenient online form to verify that I am a thief. Oh, Web! We used to have such fun.

- You might have noticed the Resistance: Fall of Man ads over on the right. We told them we'd need to play before we put it on the site, an unorthodox request I am sure, but as the hardware is (what is the word I am looking for) scarce, they didn't have one to loan. When Zipper Interactive (the SOCOM guys) brought over their Haul for the Child's Play Auction, we asked if we could borrow one of theirs, as they develop for the thing and probably had one forlorn in a corner somewhere. They brought one by, and it didn't take long to determine that we'd be comfortable promoting it.

- Wait... There's an upcoming adventure game that fuses Sherlock Holmes and the surreal horror of H. P. Lovecraft? How am I supposed to resist that shit? If one were going to catch a Tycho in the wild, this is what they would use.

just remember me when