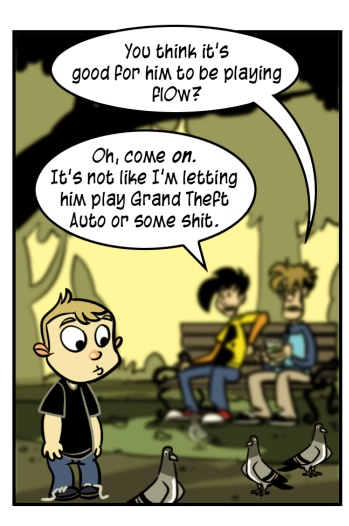 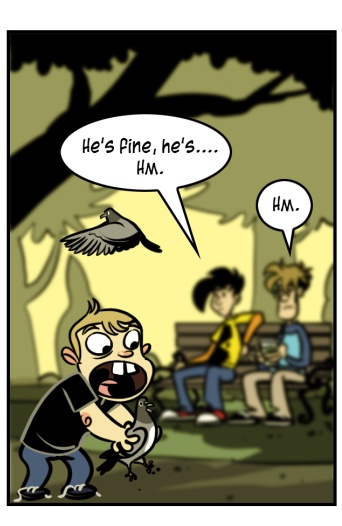 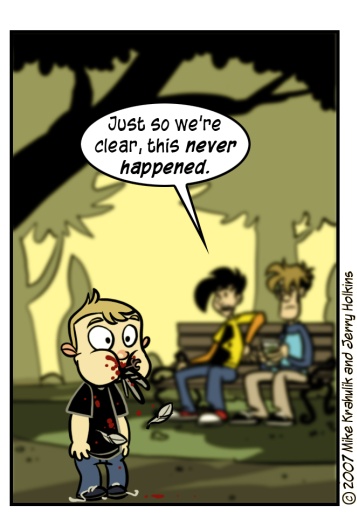 If you should see us on a bench - and you may, from time to time - you might buckle in for some heartwarming antics. At least, as heartwarming as you are likely to get from two psychopaths.

I didn't show up to GDC until Thursday, and I left on Friday, so I was only there for a sliver of the show proper. This was fine, actually, and might even have been great, because almost immediately I got the sense that I was attending an event which I had no right to. To hear some people tell it, the show has become progressively more mainstream since the first Game Developers Conference. I don't doubt that this is the case, because it happens all the time to everything - I understand they no longer let you burn actual men at Burning Man.  So, maybe it was more concentrated at earlier shows.  As a first time GDC attendee, I can tell you that its insularity was something I could feel in my skin.

I wasn't there to hear EA/Maxis Developer Chris Hecker call the Wii "a piece of shit," but I think this is related to what I was just talking about. I understand that he apologized almost immediately thereafter, no doubt after having been beaten profusely beneath a single bare bulb by his enraged paymasters. I don't agree with his diatribe, but then, I don't live his life. I don't need to massage any functionality out of the Wii's comparatively meager chip. He's expressing a frustration about something that is an abstraction for most people. Having worked as a dishwasher and a busboy for many years, I have been a part of the machinery that produces meals. You don't want to know what goes on in those recesses -  what fluids seep and flow. You really, really don't. Things... happen, back there.

I don't think we're actually supposed to see what happens at GDC, and for the same reasons. It's the Game Developers Conference, not the Media Pageview Generation Conference or any other conference. Sites should probably cover it in the style of Mutual of Omaha's Wild Kingdom - from a great distance, with a telescoping lens.

We had a lot of time to kill in the airport on our way out, so we wandered over to one of those branded Airport Restaurants - the sort of place you would never go if there was any other option. Who should we find there but our cruel masters at Sucker Punch, in whose flamboyant hand our ping pong defeat was authored. An arctic wind sang through my ribs as I recalled that evil night: their exotic, unseemly grips, their bestial revelries, the offered pizza like ash in my mouth.

I was sure to make the proper gestures of supplication. They own some portion of my spirit, now; they can pull it out with a tug, like a yo-yo.