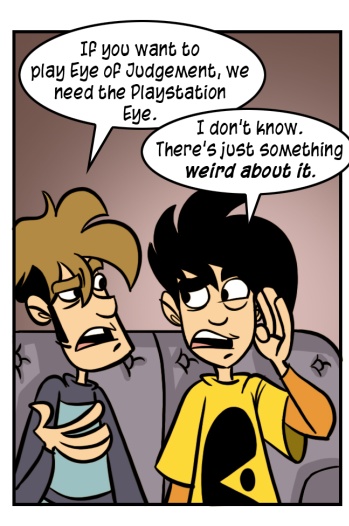 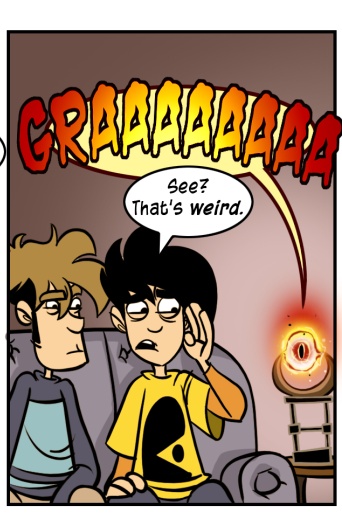 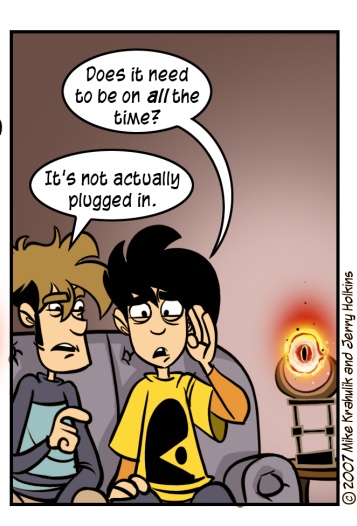 Eye of Judgement - Sony's unbearably compelling CCG, played with the upcoming Playstation Eye peripheral - may be the most niche product ever conceived. A constructible deck card game that requires a custom camera and a six hundred dollar gaming console to interpret it, "niche" may be insufficient to describe the tight, sunless, deep sea crevice such a product might reside in. Not that it matters to me, of course: I am the pale white lobster that makes such cracks his home.

Webcams always make me slightly uncomfortable, though. They aren't so much evil as they are, well... cameras, pointed constantly at my face. I've never been able to determine if I'm worried about being surveilled through them, or if I think the device itself houses some prurient intellect. I needn't worry in this case, as Eye of Judgement comes with a special stand - a kind of personal Barad-dûr - which makes the camera gaze down upon the battlemat. In "judgement," presumably.

If you find the basic ideas presented here interesting, you need to make it a point to stop by Gamespot today - they just posted the most robust preview available for the game, along with a couple videos that reveal the play mechanics. It's really something else. Games that combine deck dynamics with tabletop positioning liquefy my will, making resistance impossible. Culdcept Saga, the Magic/Monopoly hybrid I have extolled in the past, is appealing for many of the same reasons - minus the physicality of actual cards, for which I will admit a shameful fetish.

I find it appealing and would enter into a Faustian bargain to acquire it, placing my eternal soul on equal par with a USB digicam and a few sealed boosters. The equipment required to even get in the door of this thing represents a material investment, but for the right product, cost is irrelevant - as we have discussed in previous installments, desire and perception warp our ideas of acceptable pricing.  Is this game worth the cost? How about this game plus Final Fantasy XIII? This game plus FFXIII plus the fully constituted social online experience which must, even now, be in development?

The new Gears maps available this Thursday throw this principle into brutal relief. Epic has claimed that these maps should be free, and so for many any price over zero is unacceptable. I would prefer to pay zero for the things I want - but then, I've wanted maps based on the Garden, Imulsion Processing, and Swamp themes from day one. A map - an engineered play space - has a value which is, for me, substantially greater than a simulated rock song. As the map is learned, its entertainment value increases.  I will remember that it was there, near that statue, that Kiko managed two enemies while I took the flank.  I've only played the new Rainbow Maps for six hours thus far, and already there are stories worth telling the next day.

I don't endorse every scrap of content that populates the service. The first GRAW pack was a knife in the ribs and the Guitar Hero II content was the work of a throbbing parasite. I am roused to violence when I believe we are being robbed.  I just don't happen to believe this is one of those times.