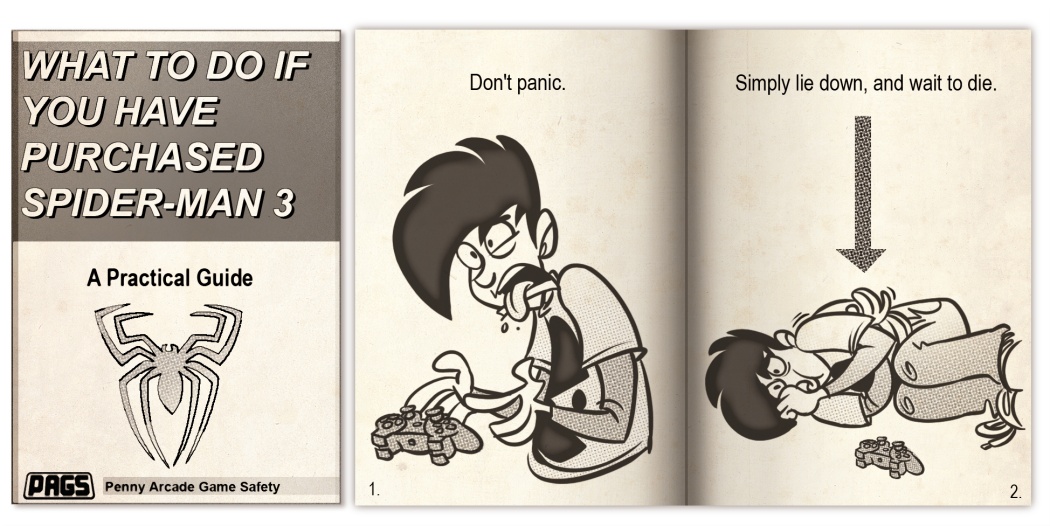 Gabriel took Spider-Man 3 home over the weekend, in the hopes that further digestion would reveal the title's hidden nutrition. You have to understand how strange this is: you don't get a second chance from him, ever. I know that if I fail him even once, I'll be replaced by some other writer - one whose love for commas is, perhaps, insufficient.

I'm not holding his impatience up as some pure virtue, but I think that there is value in his vicious methods. I can be relied upon to eat the entire meal, the napkin, and even a part of the plate if I detect that - dormant within these materials - there waits some secret vitamin. Like a dowsing rod, he is drawn with with force to quality. I am drawn with force to games with hexes and dice and thick manuals, accustomed to long rumination.

He brought it home, went through the long install again on his own PS3, and then wept under its cruel lash.

One may chew and chew on a boot, and never find steak. It was still trash, and perhaps even toxic. It is our opinion that you could still lead a full, rich life without this game. Caught in some purgatory between console generations, the game we played is quite simply not worthy of a Penny Arcade reader. We don't pay any special mind to review scores between seven and ten, but when a review drops below this range, we almost always pay attention. Perhaps if scores near ten's himalayan peak were more rare, we could invest them with greater import.

There are actually two podcasts today - a short one for Monday's strip that doesn't really cover the writing process, and a larger one for today's comic that more closely resembles our other "work." Even now, Gabriel is completing the show notes for the first of these - and later, my own notes will accompany today's second offering. We turn on the recorder every time we write now, so while I wouldn't expect podcasts at the current rate, we shall endeavor to neglect you less.

no strings could secure you