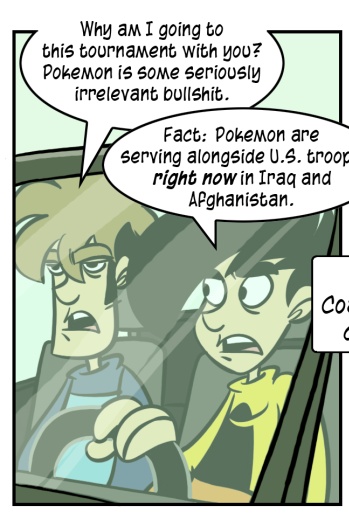 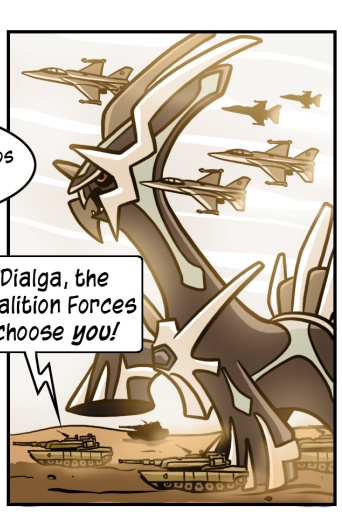 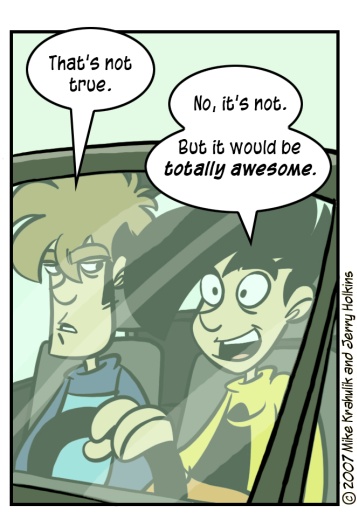 Gabriel actually attended a Pokemon tournament for reals, the one you have heard described recently.

Actually, I suppose it's entirely possible that you just tune out Pokemon related information, maybe you don't care that (for example) Rotom is an Electric pokemon, so Ground based attacks should be a good match, but since he is also a Ghost he levitates - making him immune to that class of damage. I keep saying he, even though it is basically a cloud of friendly, forking electricity. If he has a penis - and I don't know that science can even determine that - it must be a writhing, nightmare thing.

The actual tournament he attended is nothing like the one we describe in our four part storyline, which begins today. I would tell you more about it, because it's pretty cool, but he has sworn that he will manage this task himself.

It may be that we will see you very soon, at Comic-Con de San Diego, and if so I bid you a preliminary welcome. The broad gate to our empire may be found at Booth 1237 - an auspicious boothing, to be sure. The rest of the information about panels that may interest you (and also Gabriel's Armadeaddon wallpaper) may be found here. I'm going to attempt to write a couple posts to occupy those days as well, but we'll see how successful I actually am in this endeavor. There is something alchemical about the deadline that does inspire a person.

We will rely upon you for news of the Heavenly Sword demo, which drops on Thursday - hopefully locals or brave seamen can answer the pertinent questions.  These questions largely revolve around the swords in the game:  precisely how heavenly are these swords?  We are dying to know.

I finished the last Harry Potter yesterday, but I couldn't actually tell you what happened in it. It's been like that for several books now, starting with The Order of the Phoenix, where I grip the book with hunger and aggression and consume it without ever tasting the meal. I have a sense of being satisfied, but it is murky, and distant, the way an anaconda must feel one week after eating a jaguar. What is most important is that the wait, that long famine, has come to a close.

you won't want to stop it