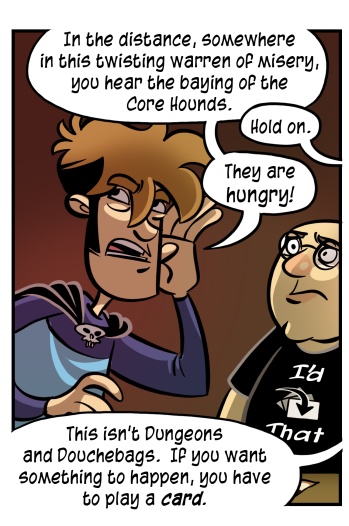 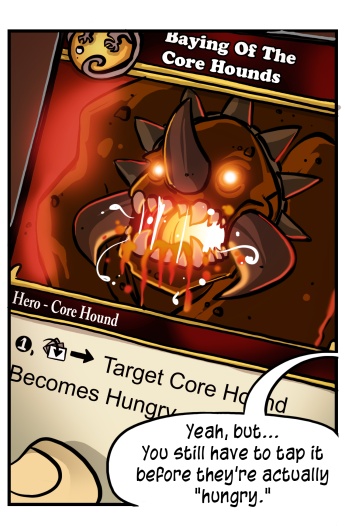 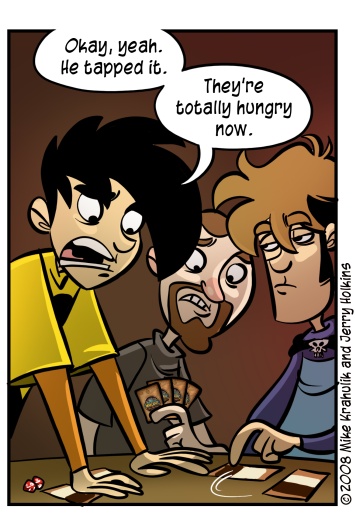 I wont apologize for it this time, or pretend to be taken off guard by some vile preternatural force, or say anything to suggest we were not entirely at the helm when it happened. We're going to see where this card thing goes.

I almost never have an opportunity to write about what happens on the table, because in order for a strip to actually occur the topic must be something we both want to discuss. We don't both have to be excited about it, but we have to feel something, even if it is only rage directed toward one other - but after almost fourteen years of conflict, we've finally eked out some tiny Venn sliver of consensus. Indeed, I'm not entirely sure he understands how deeply he has pressed into this territory - the twilit, nevernight realm betwixt geek and nerd.

You may or may not have heard of a band called Paramore. Ordinarily, the way I listen to music wouldn't put me in range of this sort of thing. I'm being purposefully vague because I don't even know what this sort of thing is called now. It may be a word that ends in "core."

They have a song called "crushcrushcrush" that I honestly hate. In recent years I've allowed popular music to set up dingy hovels in the periphery of my affection - but this song is an act of monstrous evil, a blood ritual to awaken some mercifully forgotten demon prince. The lyrics are beyond incoherent, a dreadlock of oily nonsense that is either the result of schizophrenia, multiple authorship, or collated from multiple failed songs and compressed into some tar lozenge of epic failure.

Lord knows what pharmaceutical phalanx keeps this woman's shrieking psychic legions bridled. If the two of you should meet and hit it off - perhaps at an extreme sporting event - I wouldn't consider her a long term proposition unless your health plan has a very reasonable co-pay.

I would never have heard the song if it weren't for the new store they added to Rock Band. From time to time, they offer tracks for a dollar - presumably these are subsidized, promotional offerings. A dollar would be an incredible buy for two guitar parts, but when you add vocals and drums there's almost no song that isn't worth a dollar. I resent it, but I also appreciate the manifold cleverness of it. Somehow, as an avowed sonic gourmet, I've been tricked into purchasing top forty radio "hitz."