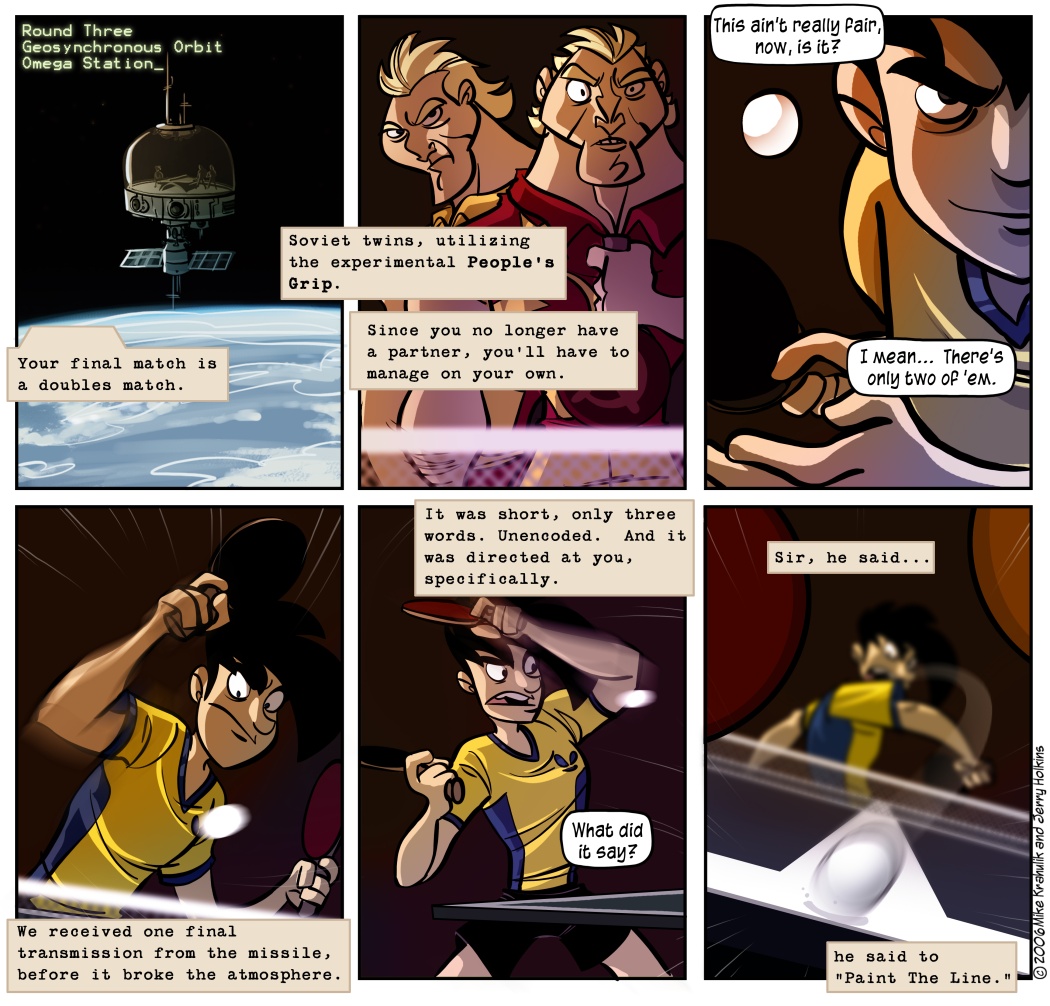 So, that's it. The Line has been well and truly Painted. I won't say where the painting occurred, as that might constitute spoiler material. This was originally supposed to be two separate strips (which probably shows) but I accidentally said it was ending today so he drew both.  Let's hear it for the artist, ladies and gentlemen!

I think that in the intervening years, I had forgotten how much I liked Gears of War. This is partly because none of my friends did, which made me feel like some usenet fetishist, sprawled out in some ultra-specified group whose hunger is defined by watercolors of discontinued Happy Meal toys copulating in Russian nuclear subs. But it is also because Epic has allowed me to feel nostalgic for it, with a two year window between releases which refines and softens those memories of play.

Also, I had the best service, so it was up to me to host. This meant the first game's Host Advantage was conferred virtually every time I played, which we didn't understand yet in those heady days. At the time, I thought I was the reincarnation of Christ.

I was going to link it before, but Gametrailers pulled it, and now they've put it back up. It's solid Gears multiplayer gameplay with no contextualization. When I say contextualization, I mean that there is no point in which Cliff Bleszinski tells you that something is "Bigger, Better, Or More Bad-Ass." The game speaks for itself, as you'll see in the clip. Anywhere you look, you'll see something horrible or triumphant. And yet he still waves this Goddamned phrase around, wild, like he's swatting at biplanes from the Empire State Building.  This motheaten, dumbass phrase is already worn the fuck out.  Gears of War 2 is a game where you can give an alien linebacker a colonoscopy with your chainsaw.  Calling it "bad-ass" may be gilding the lily.

For some reason, The Onion has the best article on the second Rock Band, and not just because they quote me. In fact it's grim indeed that I've somehow managed to generate the pullquote for the disparity between Rock Band and Guitar Hero, because I love Harmonix. Did you know that they extend a special kind of employee leave for bands who need to go on tour? Did you know that, in addition to making videogames, they also make gel insoles? It's like walking on air.

I'm open to the idea that an authorship suite doesn't constitute a mainstream feature, one that even a double digit percentage of the userbase will even take advantage of. The usage pattern may, in fact, be very similar to the percentage of people who utilized the Half-Life SDK - but everyone else still got Counter-Strike. Even so, for most people the new challenges, drum training, new drumkit, and serious refinements to the way bands are built constitute welcome improvements. None of the articles currently available define the coolest, most pro-consumer features of the product, so that must have been the secret stuff I judiciously avoided discussing.

All this junk about composition is a cover anyway; I'm only looking for an excuse to form a band that plays nothing but punk versions of worker's songs like Union Maid and We Have Fed You All For A Thousand Years. I suppose I could just use a real guitar.