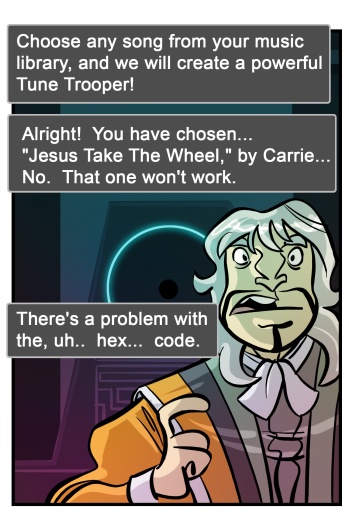 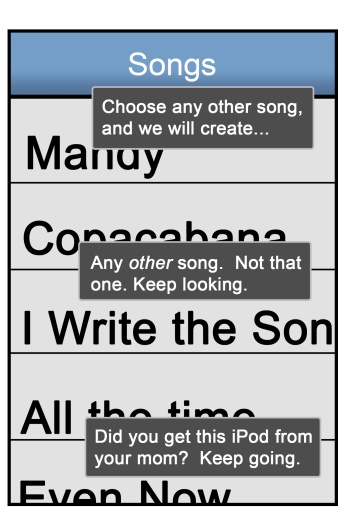 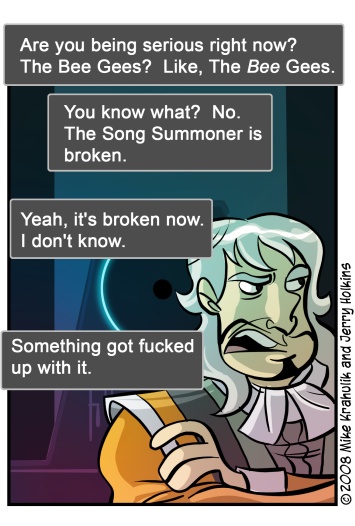 Neither iPod we own is capable of actually playing Song Summoner, so we had to borrow a peek at someone else's. Like a Monster Rancher, an Audiosurf, or even a Vib Ribbon, Song Summoner can transform your music collection into gameplay. The metaphor here is a tactical game, and the product is (startlingly enough) from Square-Enix, a company with a strong pedigree in the genre. I'm not certain that the clickwheel is a strong contender ergonomically for this kind of experience, but when they dish up the inevitable iPhone and iPod Touch versions I'll have reason to celebrate.

One does shudder, though, to imagine the hideous composition of Gabriel's army.

There are cases where I strongly oppose the downloadable content model this generation of consoles is perched upon, and I usually try to make those clear in a way that contributes to a useful dialogue: for example, I don't like being made to pay for content that exists on-disc, I don't like paying for content that confers advantage in a multiplayer context, and I don't like paying for bullshit.  Bethesda was strongly chastised by their earliest efforts in equestrian couture, and made their subsequent offerings more substantial - less scrap, more haunch. That's the obvious case, and it's become legendary as a result, because it includes a resonant dramatic arc that culminates in the image of a consumer with their arms raised in triumph.

In general, though, I seem to hate this model less than most people. I never feel sufficiently revolutionary when I enter a thread and see people sharpening sticks. I'll nod, of course. I may even grab a branch and begin to whittle half-heartedly, but unless they're trying to sell something that I don't agree should be sold at all I'm typically delighted by the prospect of more stuff. This sort of thing just isn't startling to tabletop gamers, who may purchase a game, extra pieces, markers, chits, dice, minis, expansions, armies, paints, brushes, flair, etcetera. Even the table itself involved a transaction at some point. We know ourselves to be engaged in a pastime that is inherently a la carte.

What agitates people is, I believe, a kind of switcheroo: with DLC, a publisher can retroactively make the product you have purchased incomplete. Sure, these offerings are optional, but they're not especially avoidable if your friend Phalanxxx bought the Goddamned shit and now he spends his evenings doing battle on windswept bluffs in some other playlist. They don't feel like additions, they feel like voids, gouged out of your prior investment. But now, and this is another tabletop scourge, there is a thing out there that I don't have, and it fits perfectly into this other thing I have, and my shelf aches for the lack of it.  Even though it's a virtual shelf and none of this stuff actually exists.

There it is - there's the trouble.  I must own the missing part.  Collectibility - that mysterious, overwhelming fifth taste.  God, these people must love me.

lego haircut and a polka-dot dress