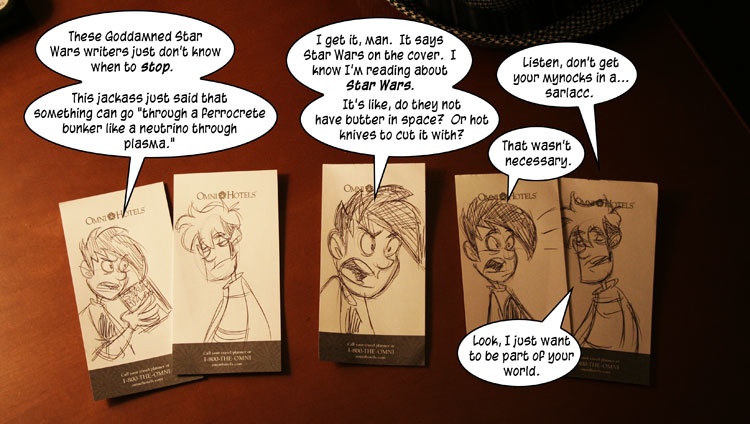 San Diego Comic Con is upon us, which means (among other things) that we're writing and drawing Penny Arcade on any surface we can find and then photographing it.  Originally we did it this way because our laptop gave out, but now it's all we want to do whenever we go places.  Also, in order to get napkins to sketch on, I need to order drinks.  The elegance of this pristine mechanism is breathtaking.

As regards the strip, Gabriel was disappointed in the Star Wars book he brough down with us.  I found this encouraging.

Speaking of Star Wars books: we've got dinner scheduled with our friend Karen later this week, who apparently just got her paws on the Gears license.  Not that she has paws.  At least, I don't think she does.  I'll broach the paw issue at dinner.  She's usually writing about the other Delta Squad, so maybe some of that knowledge cross-applies.  In any case, her chief contribution as a Star Wars writer was in her world building.  Even in a context as mercilessly harvested as Star Wars, she found a place to set up shop - conversely, we know almost nothing about Gears.  I suspect she's enjoying herself.

The trip has been a nice opportunity to put CivRev DS through its paces. I said that I was hoping for a version of the classic franchise that recalled being huddled over a 386. Optimally, the game would come with a peripheral that was a 386, and I could play it on there. Civ came out for the N-Gage, you know. The first Civ.  I'm sure nobody played it.  It was probably perfect.

If it's retro you're after, this version really does work - and the chunky, pixelated presentation only serves to reinforce memories of whole summers spent indoors.  Indeed, the presentation is so raw in many places that I've begun to assume that "lackluster" was an aesthetic choice.  Performance is often slow, as though you're simply asking too much of the thing.  It's not the most refined or beautiful interface, but you can conquer the world with it, which seems like a mark in its favor.  As for the rest of it, it's got multi with simultaneous turns, Wi-Fi support, and the same "Game of the Week" option to rank in a weekly strategy challenge.  I was glad to have it during the flight, as it provided a welcome respite from long mediations on my own death.

In case you are checking this from your phone the day of the show, I should tell you that we are situated at booth 1237. No, we don't know where Jhonen Vasquez is. No-one does. No-one can. Jhonen Vasquez is a quantum event.