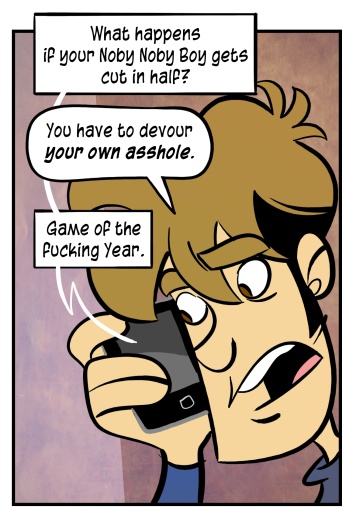 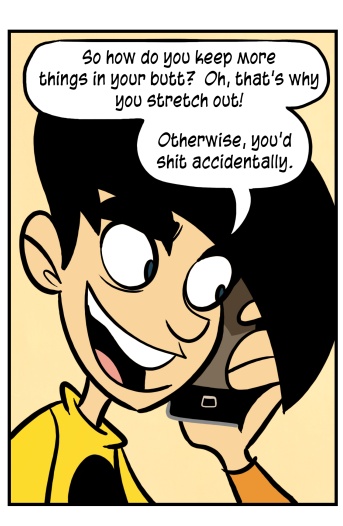 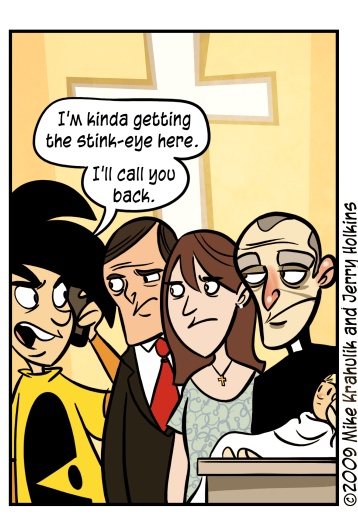 With Gabriel home sick on Friday, we each purchased Noby Noby Boy independently with an eye toward creating a strip based on it. We agreed to play it for an hour apiece, and then convene our fraternal order to perform the Ritual of Writing.

After that hour had elapsed, we were able to determine that sometimes - sometimes - a squirrel is visible.

We guessed he might be responsible for loading, that he was The Loading Squirrel, but we don't have any evidence for that. There simply is a squirrel, the way there is a bird, and a watchful Sun, and a long Girl, a pyramid, a few cacti, and some boars. It's very experimental, and it asks the same of the player: to engage it in a playful, extemporaneous way. I never managed to discover the game that Gabriel found in it, the lens of his awareness swollen by fever. Nor could I seize the marvelous product described by this Eurogamer review, which sounds like it would be pretty good. It's not wasted money, by any means. I feel as though I've funded some kind of Exploratory Gaming Committee, whose brave works will enrich our people.

The day Dawn of War II launched, I spent most of it writhing in anticipated pleasure, enduring the hours until its eventual Steam release. I could go on like this, about how I scooted the dinner around on my plate while it came down over the network, painted an army prior to playing the game proper, and so forth. I'd just be stretching it out, though. The story ends poorly.

When played under Vista 32, there's a crash bug that does much what you might expect. Trying to consume the game in cooperative mode with Kiko, we could not load the second mission without one or the other of us crashing. We've since learned that lowering the detail might help resolve it (among other strange rites), but I had this machine built expressly to pulverize today's entertainment software. So I shelved it, until such time as a patch was released.

That was the intention, at any rate. I've been playing the first three levels in different difficulty settings, eventually settling on Captain, hungry to play but unwilling to invest time that could be lost or experienced with a partner in co-op.  I've been through this cycle maybe three times now.  It's been very well received for a game that crashes to the desktop and (until very recently) ate your save games, which begs the question: precisely which game were reviewers playing?  They may want to consider selling that vesion in stores.

perhaps as someone else