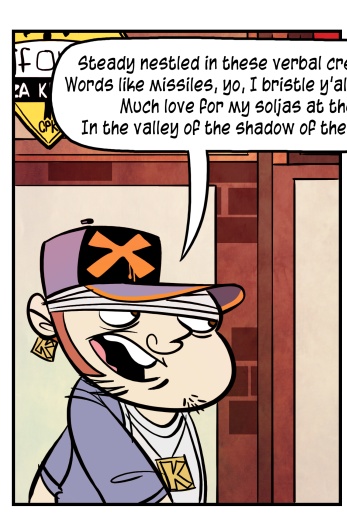 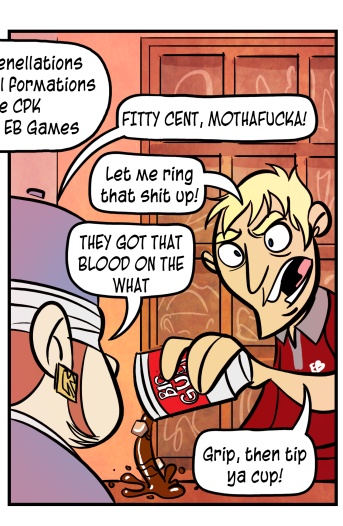 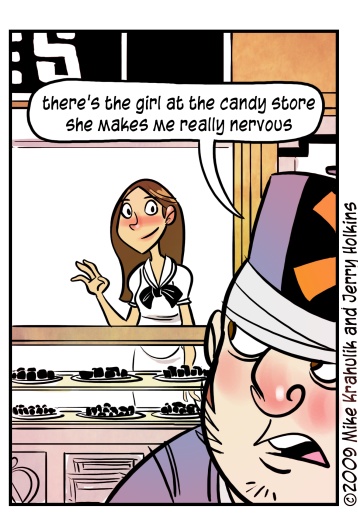 We exhibit a curious psychology in our writing: whenever we create a character for the sole purpose of reviling it, eventually we come to see things their way. We have a kind of sympathy for these shuffling creatures, even though their entire purpose is to act as pinatas in some aggressive adolescent fantasy. We want to make their imaginary lives better. The Chuck/Charles dichotomy is a good example, but even the villain Franzibald gets his due: his pathetic works take on a kind of inverse grandeur, and exploring their cursed plain produces a sensation which is not unlike pleasure.

So it is with Kevin, better known as K-Real, and occasionally Keazy. Invented largely to parody the sort of person who would purchase 50 Cent: Blood On The Sand, the fiction becomes difficult to maintain when I, myself purchased two copies: one for me, and one to inflict on a friend. It was simple, then, to imagine the young man as the product of an environment where his behavior is not pastiche or parody but rather an authentic expression of self. That's how you end up with something along these lines.

Having spent a largely enjoyable evening with the title, I've had the morning to consider it.  Developer Swordfish Studios has made the game easy to enjoy, because many slices of the experience are things you may have enjoyed previously. The core game experience, The Club's score mechanism based on pacing kills, is profoundly welcome. I never thought I'd see it again, but it's here, and it works. You've got the Gears cover system. You've got Army of Two's economy. You've got explicit warnings of where danger will appear, similar to lightgun classics. It's got quests. It's got rail shooting. The game is Dim Sum: a rickety cart with a random assortment of steaming whatever. Sometimes nothing is more delicious.

It's not a technical masterpiece by any means: it has the "loose" feel of most third-party games that leverage the Unreal Engine. Committing to co-op is always laudable, but it's got some edges: when either player enters the upgrade shop, the game simply pauses for the other, so you need to take turns. I wish that the "kill timer" tracked both player's kills together, rather than separately, because as it stands you're fighting each other to succeed by the game's own rules. "Horde" modes are becoming all the rage, included everywhere, and the scoring mechanism makes it a perfect fit for this game: a missed opportunity. Seriously, though. It's a thug opera about a rapper and his entourage chasing a jeweled skull in the desert. It's incredibly light. For some reason, it is difficult not to enjoy it.