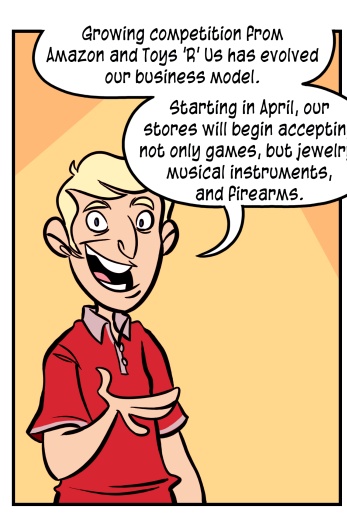 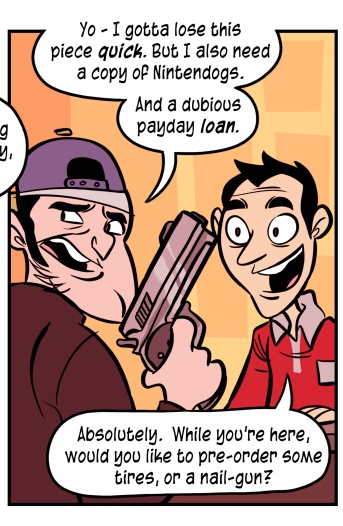 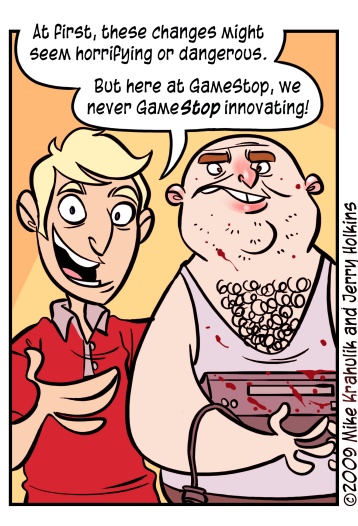 I don't remember the last time I traded in a video game, and this is coming from someone who - at one point - had an EB Games "Edge" card with over five hundred dollars in credit on it. I used to have no more than three or four games per system because I routinely harvested my collection with no hint of remorse. A couple years ago I began to wonder if the practice was on solid footing - if it had, as its outcome, the nourishment of an industry that had so elevated my leisure hours. I had no good answer, and as such, could not act.

Seeing GameStop's garish medieval feast in full strut, quarter after quarter, new venues are now angling to skim off their share of the cream. CheapAssGamer has a comparative breakdown of GameStop, Toys "R" Us, and Amazon's trade-in mechanisms. GameStop has obviously been in the pawn business much longer than these new contenders, and has a much more sophisticated operation, but the fact that Amazon pays out in actual Gift Cards makes those exchanges substantially more useful.

The primary effect this acceleration will have is to take digital distribution initiatives at Sony and Microsoft and put them on the front burner. As it stands, full downloads for modern retail games are rare, but not unheard of: Burnout Paradise is the go-to case, along with handful of Sony franchises who exist somewhere between full retail offerings and native digital products. I would be very surprised if the publishers and platform holders allowed another holiday to pass without the establishment of a robust online storefront.

I just wrapped up Blood on the Sand, and at the risk of plot spoilers, eventually thug sovereign 50 Cent manages to retrieve his jeweled skull.  I raised a fist as the credits began to slide up, looking around nervously before retracting my arm.  My tastes at the moment are almost exclusively focused on what I know to be the medium's junk food equivalent, and I want to be uncomfortable with that, but I'm not.  I don't want any form of personal investment, I just want to reap foes, progressing to the next concentration of foes so that they may be reaped also.

I'm tired of guarding my virtue, I guess. You should be very careful about listening to me for a little while, because as it stands, I get excited when I point an analog stick and the character moves in that direction. IGN gave H.A.W.X a six point seven, and their scoring system starts at 8 - I still love it. The range of interdiction is something like 3000 feet at a minimum, I don't even know what my enemies look like. Target acquisition is all boxes and diamonds, transforming it it into high-stakes aerial Geometry Wars. All my planes feel the same, the dialogue is awful, my enemies largely anonymous. For some reason, I can't wait to play it again.

wolves may lurk in every guise