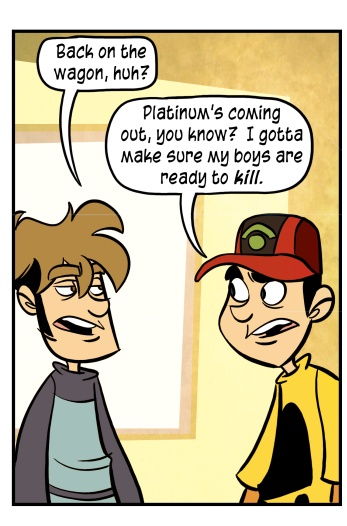 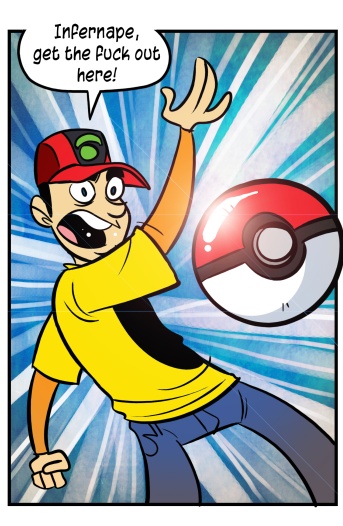 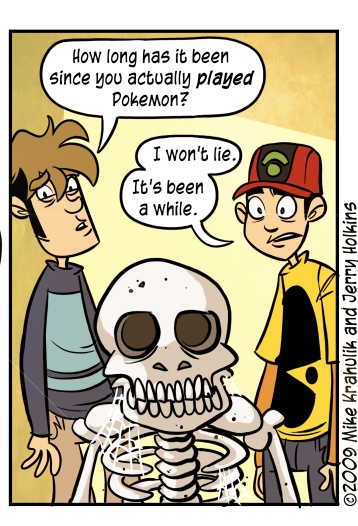 Porkfry is at the forefront of Pokemon husbandry, as has been well established - his "Living Pokedex" is a beacon to the field.  It wasn't until the last round of Pokemon releases that it was absorbed by our group generally, and for some of us, it penetrated those membranes which cradle our most crucial organs.  Very early on, I felt as though I glimpsed the overall shape of Pokemon play. I couldn't push through it. As fascinating as the endgame of Pokemon is - and fascinating, as a word, is barely sufficient - I couldn't build a roster myself because the grind on low-level Pokemon play is just too brutal. Gabe was able to manage it, but for him (and presumably others) playing Pokemon is something you do while you are doing something else - autonomic, not a conscious act but rather a function of the body.

He was having a hard time playing the new Pokemon at first, something we talk about a bit in the podcast for today's strip. It's a quick one today, but that's how it is sometimes. I'll get it uploaded here in a second.

Kiko and I stepped away from Gears of War after the last patch, as (and I will admit that this is bizarre) the things they had fixed brought the remaining issues into sharp relief. We felt confident that they weren't done patching, and could return at our leisure, but the combination of a third patch followed a week later by a four map expansion might make us sufficiently curious.

While in the throes of nightly Gears play, I purchased the first map pack for the product - on the assumption that my partner would grab it as well. He never saw the value in it, either because it was three maps for ten dollars or because we weren't yet tired of the included maps.  It was also released at the worst possible time, and looked like an act of grasping evil to many in the community. These locales were, at best, a suite of next-gen abattoirs - new places to be felled by the cheats, 'sploits, and hax which formed the core of the game's increasingly warped morality.

I wasn't able to run my customary scam*,

*(I know why Microsoft likes MS Points: they introduce ambiguity into the purchasing process. It does provide a consumer advantage sometimes, but its rare. There are certain points during the year when they deliver something no other platform can, which is to say, "cheap money." Target (and others) occasionally sell Twenty Dollars for Fifteen Dollars, which is the very definition of madness. It takes a system already built around ambiguity and tugs the lever toward surreal. I can usually haul Kiko into any kind of purchase under these circumstances. The timing wasn't right.)

and so I purchased a set of maps that I've only ever played against bots.  This is incredibly sad, and the shame is deep.

there was whisky on sunday