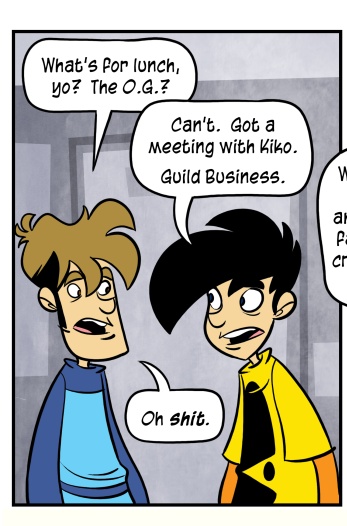 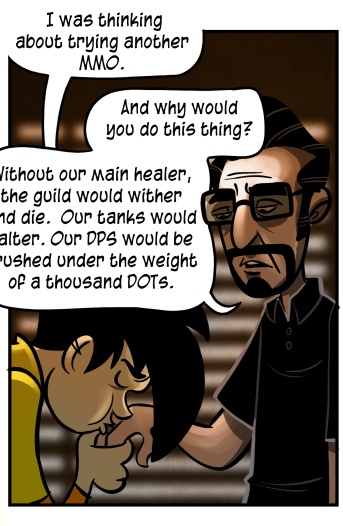 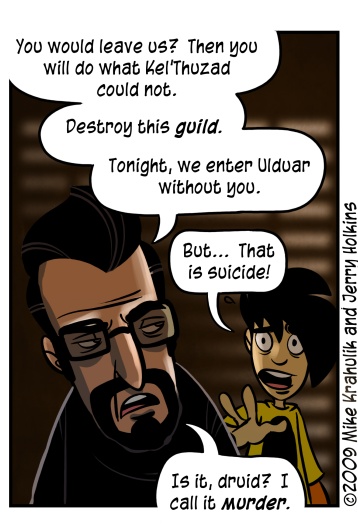 This is something we consider quite often: how massively multiplayer online role-playing games create a vortex of social musts whose wicked gravities are almost impossible to avoid.

Let's say that a person considered, even for a moment, the thoroughly ridiculous notion that they might play any online RPG other than World of Warcraft for five consecutive minutes. To say that one's responsibilities the game's key roles are non-trivial hardly contains the idea. Your presence literally makes the game possible at the highest echelons of difficulty. The only reason I was able to reach escape velocity is because I was playing off-off-off-off-DPS. Players of "skill based games" like shooters like to look down on experiences of this kind, but independent of your equipment it is (in fact) possible to be bad at World of Warcraft - I am the proof. Bringing me along is what the guild calls "Hard Mode."

I was over at Gabriel's house yesterday after running a one-shot D&D adventure, and on my way out I saw that he and Kara had checked in for the night's raid. I simply could not parse the events happening on screen. I saw some kind of zebra cat running around, and I completely checked out.

The relief rolled off me in waves; I felt almost exfoliated.

Many people wanted to know who won in the contest between Lookouts and Automata, and in the end, it was much too close - and evidence of scripting on both sides made us even more wary. So, both comics won, after a fashion. But making that actually happen took some doing.

Gabriel and I will create and run Automata, which will be "broadcast" during the San Diego Comic Con. Beginning Wednesday, and I do mean this very Wednesday, Lookouts will begin its run - completing the story set forth in the pitch, and created by friends of Penny Arcade Becky Dreistadt and Oliver Grigsby. This way everybody wins, and nobody loses, and then shortly thereafter everybody wins again.

We're about to record the next D&D podcast, if you're interested in that kind of thing. If the last session was any indicator of future performance, wish me luck.

the thing with forty eyes