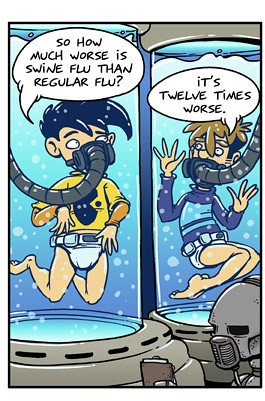 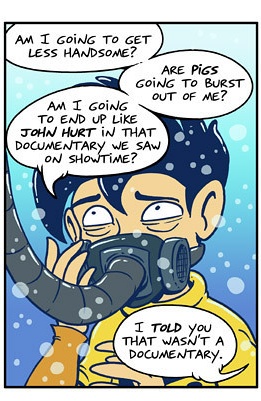 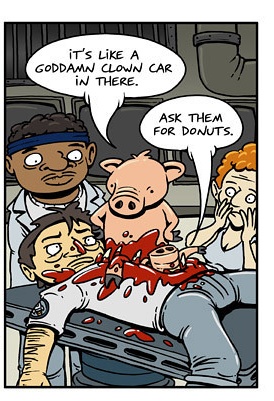 My friend Jon over at Goats pitched in to help dig us out of the contagion, with a strip that leverages pop references and timely observations in a way that is a natural fit. We have many more, from Applegeeks, Tiny Kitten Teeth, and Kris Straub, and you're going to see them all, because now it is Guest Week all of a sudden.

I'm going to try to get a strip out of Gabe today, even if I have to electrocute him, but the whole office is scheduled for a vacation next week. Typically he and I would get a backlog of strips produced for this, but he's been drifting in and out of a black sleep since PAX and the only calls he can receive are from other dimensions. I've suggested that we investigate a science fiction setting I'm developing called Dickstar Five, but he responded with an animal howl, and I wasn't certain how to contextualize that. I was originally scheduled to be a part of said vacation, but, well, you know.

My daughter has been lulled to sleep by my case fan, which essentially caps a metaphor that has been developing for awhile.

When I go to the park, there to cavort on the Big Toy, virtually the only game my son wants to play is Tales Of Monkey Island. We literally pantomime the solution to the Winslow puzzle, including the failed attempts. It's not "gaming" culture for him, it's just regular culture. You don't even capitalize the C to imply that it bears some peculiar inclination.

I usually say that the stigma associated with gaming will follow a pattern similar to that of Rock Music or Roleplaying Games, but I'm not certain those are appropriate, because those two have retained a measure of their stigma. They've managed to do so because they're still alien to the greater culture - but that's not the trajectory of electronic gaming. No, I think the operative metaphor is going to be people who believe in evil roots or in demonic possession. It's not zero, but it represents a marginalized body without a firm grip on the reins of society.

We'll have to go through all this shit again with the first cortical implants, but I think that - for now - the train may be pulling out of Crazytown.

come and keep your comrade warm