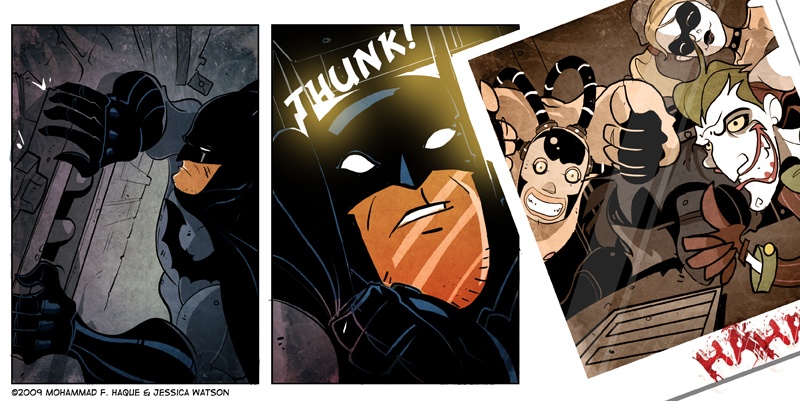 Our friend Hawk - in concert with his friend Jessica - produced today's Penny Arcade, which features Batman's ass. Just try to find that kind of content anywhere else. Actually, maybe don't do that.

The Wednesday before PAX, a wholly nondescript white sleeve arrived at the office, and in this sleeve was another sleeve, claiming to contain Demon's Souls. Luckily, it merely contained a game called Demon's Souls, and not the souls of genuine demons. But it does haunt me, still; I am rasped by it, and rest evades me, so that the weight of my unfinished deeds is heaped upon my chest. I wonder if an authentic disciple of Satan might not have been preferable.

We popped it in for a little while in the office, as Atlus is in the very business of surprising us with strange parcels. I was familiar with the product, enough to have swallowed the metanarrative at any rate: a "spiritual successor to King's Field," it would offer a "unique co-operative experience." Gabriel could only tolerate watching it for ten minutes or so. An uninspired character creation scenario did not grip him. When my character reached back into a satchel for a handful of healing herbs, Gabriel thought he was scratching his anus. This amused him for a few minutes, but it wasn't really a long term play.

I don't mention these things so that he will appear intellectually moribund and I will be declared the victor by default. I suspect that most people will react as he did: as a From Software game, it does not care if you don't like it. It doesn't care if it scares you away. They are, as always, dogged in their pursuit of... whatever they are pursuing this time, even if it means that what we might consider "traditional" markers of quality and polish are not present.

As someone who approaches games aesthetically, From Software rarely has much to offer him.

Let me come out and say that Demon's Souls is too vast an experience for me to delineate in the time we have allotted. As an action RPG, it is (certainly at the outset) a brutal affair, and maintains the Atlus pedigree as the foremost importer of Japanese cruelty. You have ready models already established for much of what you will experience, even if their take tends to be more numerically crunchy and tactically interactive than most. I think it may be of more use to you if I explain what they mean by "co-op," because when people say "co-op" I like to think I know what that means, and this is a case where things are vastly more and less than the current definitions allow.

The game is a blend of both symmetrical and asymmetrical multiplayer experiences. The most common is ambient in nature: you can leave messages on the gameworld, which populate other people's games. They're made with a built-in lexicon, and usually take the form of hints (or even misinformation) about a given area. They're also moderated by players. If a player upvotes your message, you return to full health. Can we agree that this is bizarre? But deeply, incontrovertibly interesting?

You can, and will, die all the time in Demon's Souls. Being "dead" doesn't keep you from playing, but it does lop a chunk of your maximum hit points off, which makes the game more difficult. At the same time, it increases your damage output and expands your play options. Using a variety of in-game items, your "soul form" allows you to be summoned by other players to help them, to compete with other players for in-game currency, and even to haunt other players games as a fearsome Black Eye. "Co-Op Play" isn't entirely accurate, but then, "Die In-Game To Do The Will Of Others As A Morbid, Servile Spectre" doesn't make for a concise bullet point.

That isn't co-op as I understand it, but let us rejoice in it!  Let the air resound with the detonation of our staid definitions!

i am a mountaineer