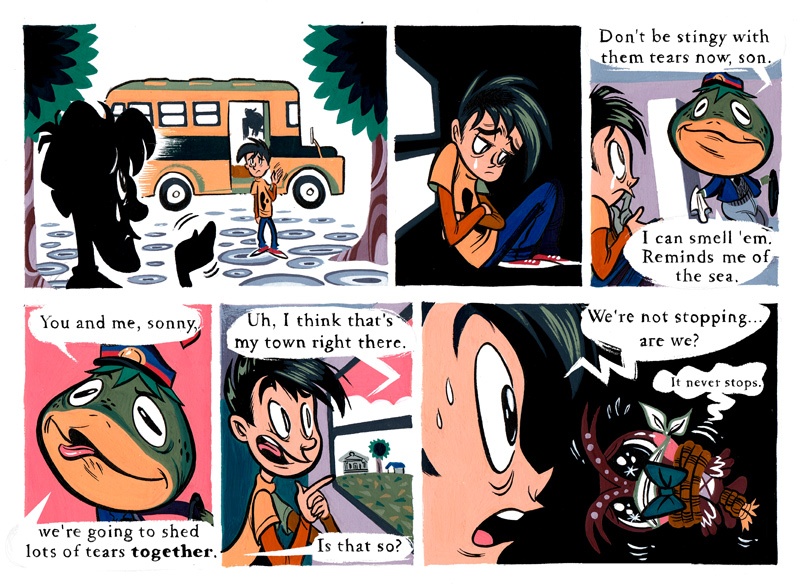 Finally rejuvenated after delivering The Lookouts, Tiny Kitten Teeth heard Gabriel's croaking call for assistance - and rode in heavy. Of course, we are overjoyed. I've got a few more strips curing now, aging, becoming redolent, and if we still have a few left over when we reclaim our rightful place, I will post them all at once, in what will become known as the Great Feasting.

The current plan is to grip the strip's creative yoke on Monday, but I honestly don't know what kind of Shape my cohort will be in. Ravaged by back-to-back illnesses, I assume he will return to me as little more than a bloody thumbnail and a driver's license.

I feel like there should be a coda on my bit about Demon's Souls. Hopefully the earlier missive has softened you up for just such an attack.

Resident Evil 5 had many problems worth discussing, and discussed they were, at a level of volume appropriate to their magnitude - but there were also more mundane but still interesting quandaries. One of the inescapable questions it posed was whether or not a suspenseful experience loses something vital (that is to say, the "suspense") with the addition of another player, and if so, can this loss be ameliorated. Demon's Souls approaches the question in a fascinating way, and with great conviction, player expectations be damned.

It was considered a big deal that Demon's Souls had no voice chat, something that could reasonably be called bizarre in the year of our Lord two-thousand and nine. Of course, that was when we still had some misconceptions about what exactly is entailed by the term Co-Op. The game is incredibly dark: your task must be completed, and death is no escape. Frankly, I think you've got it worse here than Chris Redfield, because if he dies, his suffering comes to an end. In terms of its difficulty, its rationing, and its unswerving hostility toward the player, calling it a kind of Medieval Survival Horror isn't out of line.

It's true that in Demon's Souls, you can get help you if you want it - but that help is in no way some inherent, involate notion. You can draw the trapped spirits of other players from Blue Eye Stones, binding them into service. But they are ghosts: they do not have the power of speech. From Software played with the dynamics of voice to incredible effect in Chromehounds, and in a similar way, the lack of voice in Demon's Souls is a thoroughly meditated act. The only dialogue is game's dialogue, and the only narrative is your narrative. Should you complete a level with the help of these friendly spirits, they are exiled from your game - their bodies returned to them, free to continue their own stories.  At every step, they carefully guard the sanctity and dynamics of your isolation.  It's a single player game, with an ambient multiplayer community lurking always in the periphery, manifesting in strange ways according to some gothic body of phantasmal law.

barely on your feet