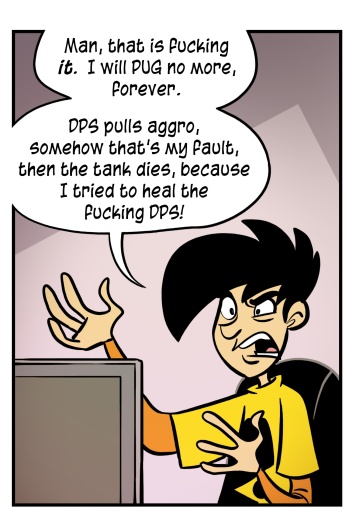 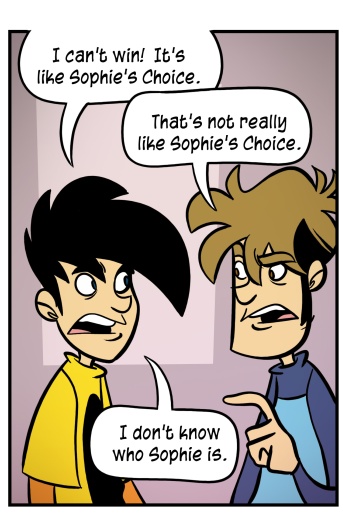 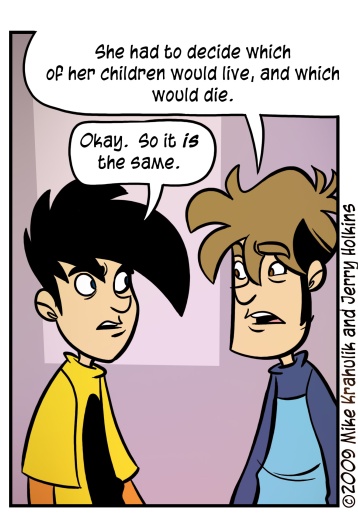 Many of the strips we produce catalogue the process by which Gabriel learns about the world around him. In many ways the strip is about him, and my occasional efforts toward his rehabilitation. He joined some random WoW group in an effort to procure a new magic belt or whatever the fuck, and found himself rebuffed by the universe.

There was some fallout regarding Bungie's decision not to open ODST's Firefight mode to matchmaking, but that may be one of the worst Goddamned ideas ever conceived, rivaling even Chocolate Covered Foreskins. The parallels here are instructive.  Firefight in the absence of camaraderie would be masturbatory bot-grinding. Playing against your average Halo player is bad enough; playing with them may be the only thing less appealing.

As if this ostensibly festive season were not already dense enough with stimuli, there is another launch happening today - one whose blip likely doesn't appear on most instruments.

When we were at PAX, we invested a considerable amount of our very limited time in a game called Arcane Legions, which we had never heard of. Since most of our leisure time manifests before or after the Expo halls are even open, much of this time was spent examining the game pieces, as a kind of divination endeavoring to understand precisely what sort of game we were looking at. Based on a demo round we played at the show, Gabe picked up the starter - something like forty bucks for a kind of sampler platter of the different armies.

I like wargaming, whose nexus of systemic governance and physicality is glazed with piquant asymmetries, but there is no room in my life for their tremendous investment - on any of the axes it demands. I recognize this as a personal failing, and still value the hobby, consuming everything around the games themselves: availing myself of their rich supplements and internalizing the meticulous construction of their worlds. This middle ribbon of players:  lapsed wargamers, boardgamers, and CCG players overlap in a way that Arcane Legions is designed to satisfy.  I'm a part of that group three times over.

There are official tutorials available on YouTube, but they're somewhat bizarre as they incorporate actors and weird things happen and whatever. Here is the basic version, and if it appeals to you, further investigation may be in order.

The basic metaphor consists of armies fighting on a surface among terrain, something you likely already have a mental bin for. You may also have a psychic label for the concept of movement trays, which ease the maneuvering of battle formations on the table. In Arcane Legions, the movement tray isn't just used to shuffle the unit around - it literally is the unit, with pegged figurines plugged into slots on the base that confer varying amounts of attack power, defensive ability, and unique skills.

Here's where things get interesting.

When a unit takes damage, each point of damage is equal to one peg. Men or beasts must be removed, making the number of pegs a figure has equivalent to its hit points. But since a unit's very statistics are based on where your figures are slotted, every time you take damage, you must making a choice - a surprisingly engaging choice - about what you are willing to give up. This idea is core to the gameplay: most unit cards have empty slots that will grant greater defense or attack if figures are placed there, making each group's effect on the conflict dynamic over the course of a game.  There are many reasons I enjoy it, but this is the foundation.

One of its weirder notions is that, by joining the game's "Centurion Club" for three dollars a month, you gain access to a "Unit Builder" that will let you create your own custom, tournament legal armies. That's not available at this precise moment, so I can't really speak to it.  It's an idea with the potential to add a lot of value to that "extras" box that always develops when you play games of this type. Even in its absence, the game seizes - and then grips - like some terrible mandible.

from the dust will come a song 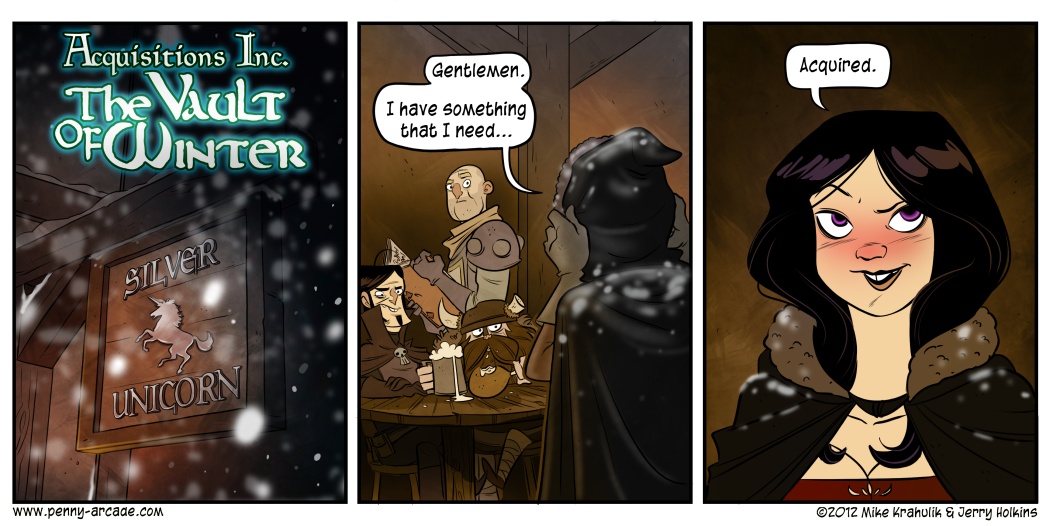 The Vault Of Winter, Part One