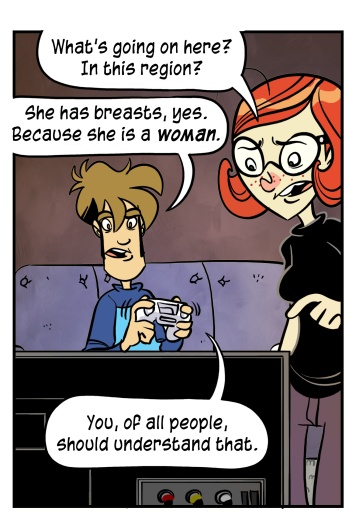 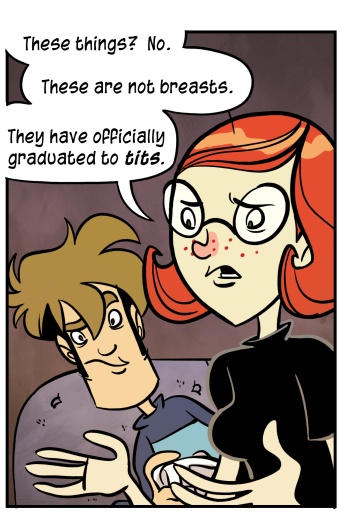 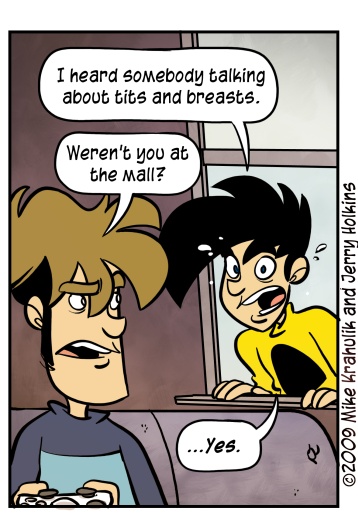 Bayonetta's shape - I almost hesitate to call this impossible contraption a "body" - is striking. I don't mean that as a euphemism for appealing. I mean that the ideas which inform it actually pound the mind, repeatedly, like a truncheon.

Even though the comic deals specifically with boobs, boobs which have earned their WTF from Juggs University, her silhouette (as a general construction) is too thoughtful to be dismissed as mere titillation. Things in this game tend to happen very quickly, as you might have seen, but if you're paying attention there's something to meditate on in virtually every frame. The developer blog is as frank about their creative process as I've ever seen, and is a far cry from the usual "package" of regurgitant slop media outlets are typically exhorted to broadcast. Even in the absence of the game itself, it will become clear very quickly that these people were not simply coming to work. They were engaged in a kind of mythmaking.

Because every buckle, every decoration, every insignia is placed with such care, I started to wonder about where exactly the line was between something that is exploitative and something that is epitomized. When you look at something like Marcus Fenix, and I said something as opposed to someone on purpose, there is the same exaggeration that borders on mutation in his physical structure. But since Marcus Fenix is a man, his physical virtues are an acceptable template for such extrapolations. If a woman is the subject, and is thus interpreted, now you're engaged in a truly dangerous enterprise. There's something very strange simmering below that assertion, and it's weirding me out. I was glad to see Leigh Alexander discussing the same thing in her article, because now I seem kind of smart by association.

There's all kinds of cheesecake bullshit that people try to get away with, particularly in popular media - I'd never say this wasn't the case. People are understandably very sensitive about this kind of thing. Manipulation of human beings via the female form is more or less de rigeur. This established, would we be able to distinguish between such manipulation and an authentic creative statement? Bayonetta more or less says no.

where did we get this plan