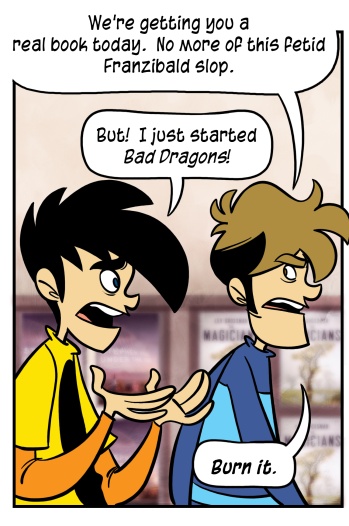 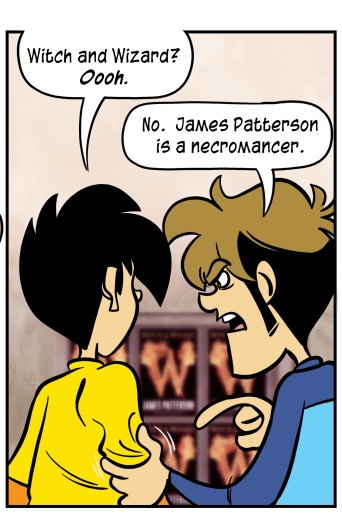 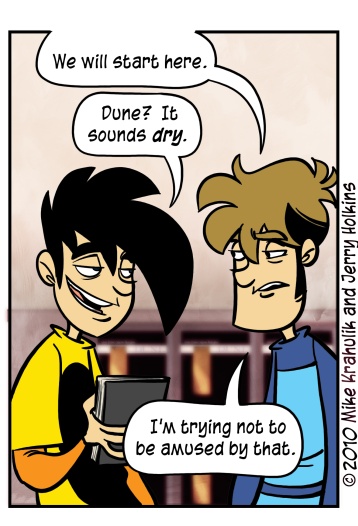 My cohort's education is always foremost in my mind, but in the past I've typically resorted to misdirections that (once discovered) set the project back substantially. This time - and I recognize that this is strange - I am actually taking his predilections into account. Before, I would have flopped a book like The Fifth Head of Cerberus onto his Intuos and said "eat this, dog." I'm taking a different tack now, a breadcrumb trail, so that his mind is starving at the end of each book, and into that ravenous mind I will continuously heap works of burning fire and terrible consequence.

Oh, and this is why the Patterson thing in panel two. Well, it's one of the whys, which are quite possibly infinite. The description for Patterson's Maximum Ride, Book One: The Angel Experiment suggests that "Max, Fang, Iggy, Nudge, the Gasman, and Angel are pretty normal kids - except that they're 98 percent human, 2 percent bird." Gabriel read this aloud from the site, and I must have hit my head on the corner of my desk when I was gripped by a black sleep, because when I woke up there was blood.

One of the unexpected delights of a generally gaming-sparse CES was discovering (during a listless trawl of Gametrailers, expectation threshold: 0.0) fully seven videos that revealed more of Lego Universe than I believe has ever been shown. I'm hedging a little, because maybe people on their newsletter or some shit know all about it, but what I saw in that presentation is something I want access to pretty much immediately. So many Goddamned questions. I just want to run the executable, set my son on my knee, and spend an entire weekend answering every one.

This has got to be some of the most ridiculous crap in recent memory: King's Bounty, and the Armored Princess standalone expansion, for eleven dollars and twenty-five cents.

That isn't some kind of referral link or something, it's not a part of some campaign. It's just a couple of ridiculously smart games for a completely stupid price, the first of which appeared like a heavenly host when my faith in the personal computer as a context for amusement was situated at a point far, far south of the valid graphable area. If you find yourself in a similar predicament, or simply wonder why "they" don't make "them" like they used to, you can spend less than twelve dollars and fix that. Maybe forever. And if you're still unconvinced, there is a bulletpoint in the sell text which reads:

> Possibility to turn your horse into a Pegasus which can fly

SOLD (if I hadn't bought it already)

the spring of the grandfather clock unwinding