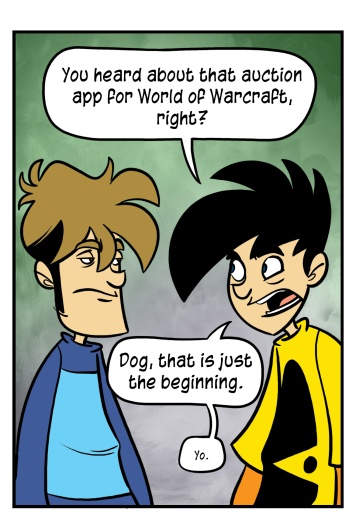 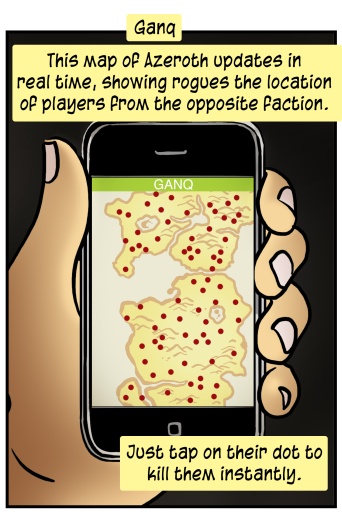 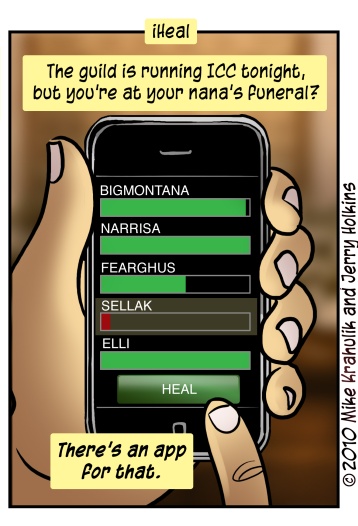 Virtually every person who's "done time" in Azeroth has begged for a portable Auction House application, a hunger which is being answered with a premium application - and may it be the first of many. I'm not a current player, though Gabriel made an honest entreaty yesterday morning to that effect. Even so, I'm intrigued by the idea of secondary screens as vectors of gameplay. Make no mistake: the Auction House is absolutely a game. For my part, I hope they don't implement this and then recline in satisfaction; harvesting and crafting in particular are open to a systemically valid manifestation.

As those secondary screens gets larger and more powerful, they become capable of richer interpretations of the dataset. The currently deep in development DUST 514 is a good example of this: harnessing the profound dynamism of EVE Online's player-driven economy to seed a completely different game, on a different platform; games which are "related," almost in the genetic sense.

As an adjunct to Concept Prime: the first cross-platform games for Live, the ones where PCs and consoles could play together, put forth the idea that these two groups of people want to play the same games together at the same time. I don't know that this is true exactly, and I don't know how successful such experiments were, but since people never do it anymore I'm guessing they weren't exactly spigots of molten gold. At the most rudimentary level, using a PC to enable superior console play - this is the Dedicated Servers argument - is the most obvious, useful, and boring.

It's an unmitigated good with clear advantages, but my tendrils recoil when I think of virile, wholly valid gaming equipment acting exclusively as halfway houses for lost packets. These machines have wholly unique control schemes coupled with an almost horrifying might; they should be marshaling forces, laying great plans.  Think ye on a multiplatform Allegiance, and wonder why we have not returned to that fertile soil.

I went back to the kitchen yesterday to grab a drink, and hearing the rasp of tearing foil in the next room wandered in to determine its source. Kiko and Gabriel looked up from the table, then, Magic cards spread from hell to breakfast, starter boxes split with the fury of their opening, a mixture of guilt and fear percolating up their faces. They were orchestrating some kind of card draft, frenzied and immediate, like they were bagging a huge mountain of coke in some halogen flooded sub-basement.

I assumed the unmistakable eyebrow crinkle/lip configuration that was like, "Magic, guys? Seriously?"

But Magic it was. They started with Pokemon, ironically I think, moving on to harder stuff like the WoW TCG, ever skirting the form's coiled All-Father. They are engaged in a perilous sort of business, here, but they'll never know it; not 'til ten years hence, looking into their own hollow eyes in the bathroom mirror, trying to scrub tiny flecks of foil which will not come off.

your body was black and blue