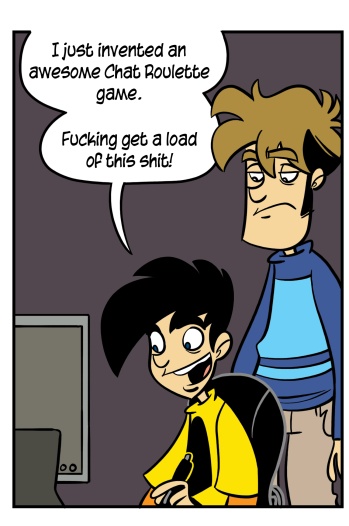 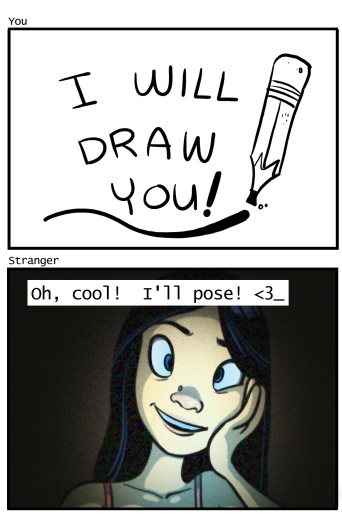 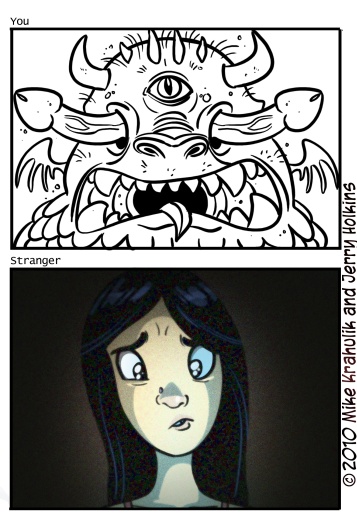 We have invented an incredible new game. It is called, simply, The Game.

The rules are concise, which lets you bore directly into its core of boiling molasses. It is a game you play via Chat Roulette, which (as names go) is utterly complete as a descriptor. Chat Roulette connects you, your webcam, and your microphone to another random stranger's all-of-the-above. Also, in many cases, their all-of-the-below. This second one happens a lot, out of nowhere you're watching a man you don't know and can only partially see furiously engaged in what might be called a "gripping single player experience." It's so commonplace in fact that it ceases to be in any way startling. It's practically the default, with all the energy and novelty of the number three combo meal.

For our purposes Chat Roulette is a Social API, to which we have hitched our nefarious executable. Today's post and comic give the whole thing away, so it may be that we'll never be able to play it again. We've played it a lot, though, so I suppose it's possible that we've wrung it out: Using CamTwist, we substitute a live image of our desktop for the camera feed. This puts the tablet in play, and allows us to use Photoshop to project a very simple message:

I WILL DRAW YOU

I don't know if it's the capitals, or what.  You would be surprised the effect this has on people. That is, unless you can draw, in which case you already know the bizarre power the artist has over lesser creatures. Like some ensorcelled picollo, the offer to be drawn stirs up some response which occurs in the place before thought, before the very mechanism of the self, so that the pink and mewling thing writhing around within the ridiculous and illusory "individual" wriggles to the fore.

It is at this point that Gabriel draws a massive erect phallus. You may click on that link without fear; it just goes to the comic again. Or does it?!?!

The best part about The Game is that it sports wildly nontraditional win conditions. People on the "receiving end" can lose, absolutely, and they often do. They lose big. But there's literally no scenario on our end that even resembles defeat. If your audience of one or more people proceeds to laugh so hard that one or more of them falls over, this must be considered victory. There are other, more bizarre outcomes I couldn't begin to describe. But watching a person's face shift from delight and expectation to horror, fear, and disgust - the twilight shift that heralds a life spent in absolute darkness - well, this must surely be called victory also.

As I'm sure you can imagine, there were many responses to Friday's offering. We received many communiques from people who create games for a living, across the widest possible spectrum, and there's no monolithic viewpoint - other than a correlation between the size of your game's budget and your willingness to endure casual piracy.

For my part, I'm aware that people copy games - I was twelve once, after all - but the extent to which piracy is accepted as a valid ethos is absurd.  It's considered the appropriate response to so many scenarios that the notion of it as an outgrowth of any coherent ethical framework is hilarious.  It's so, so rad when people tart up their nihilism.

eating and sleeping and turning pages