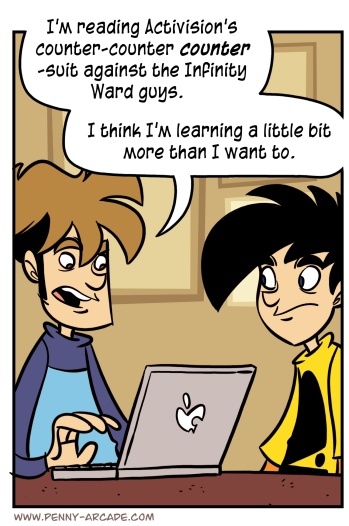 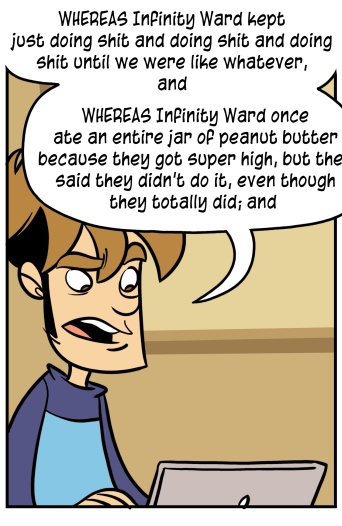 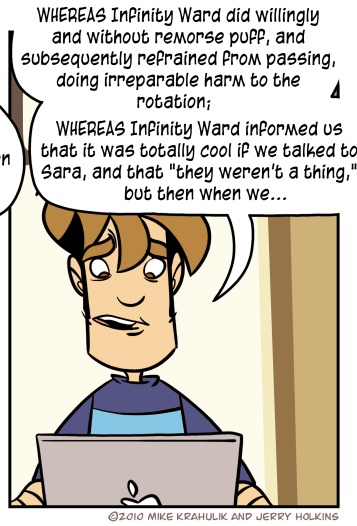 I've been asked before why we haven't "weighed in" on the Infinity Ward/Activision lawsuit, and the main reason (I would say) is that it is exceedingly difficult to tell what is true.

Know that I have a thunderhead of dark crows situated in the vicinity of every word spoken in regards to the industry, raw, jag-beaked birds, rough specimens that perch and hear - but without the documents everyone is fighting over, the whole thing is pretty maury.

It became clear almost immediately that the blogs were being leveraged as forward positions in some kind of Public Relations war, and I was reticent to arm either party. Plus, since villainy on the part of Activision was the universal assumption of every sentient creature, what is the role of the satirist?  But once you get three responses deep in this pissing match, when all pretense at being rational adults is dismantled, it just starts to get sad. When I read a piece from the complaint that suggests West and Zampella took

"a secret trip by private jet to Northern California, arranged by their Hollywood agent, to meet with the most senior executives of Activision's closest competitor,"

I wonder if it would be okay if they had met with a less close competitor, someone farther down the list - Majesco, maybe. This is some jilted lover shit, some ex-roomate shit, the law content is incredibly low, and I can understand why they might not like this but I don't especially get how it's illegal.

I'm a parent, so I know this tone, and I get enough of it at home. It's that chemically optimal blend of petulance and cheek. It's pretty incredible, all told. Time was, the axe swept through when you didn't deliver. Now, even if you make a billion dollars, this dark axe mysteriously retains its momentum.

To say that I'm obsessed with Splinter Cell doesn't begin to chart the surface of my longing. From the inception of the franchise, I've wolfed them down with an almost feral abandon. I wasn't able to finish Double Agent - I didn't like it as well as Chaos Theory, which is one of the best games of all time (see: reality). It wasn't bad by any means, but like Alien 3 it had the misfortune of being released out of a more charitable sequence. Also, no co-op. Because where my co-op at.

It's widely understood that "Splinter Cell: Conviction" has been multiple games over the course of its life, and the one it eventually became jukes a few series staples. Technology and thematic changes abound. Rough water is the norm, but its history is particularly storm-tossed.

Maxime Béland (which is really more like Megzeem Beylonn) is familiar to Rainbow Six: Vegas fans, and once you have the pedigree in place, a sensible model of the process forms. Vegas was considered heretical at the time as well, with a third-person camera (gasp) and cover system (horror). You'll recognize Conviction's shared character progression in single and multiplayer as another inheritance.  Crucially, the primary innovation of R6:V - cover as an active press, as opposed to a binary state - is incredibly smart in practice, an almost uncanny fit.

The review's apparent exclusivity has lead many to be wary of it, but the IGN review suggests a five-hour single player campaign that has lead many other people to be wary of that. If you weren't planning on taking advantage of the extensive cooperative multiplayer campaign, I can absolutely see the concern - but seriously why would you do that.  That is like buying a Snickers bar, and then only eating the receipt.

i was trying not to breathe