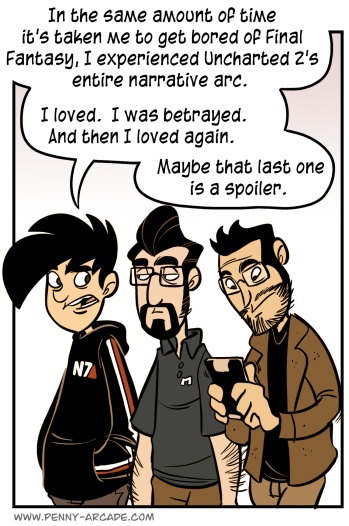 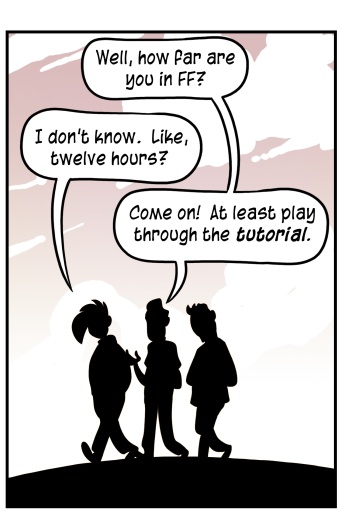 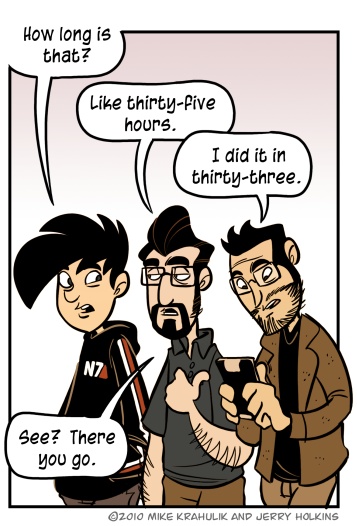 I don't think I'll ever get back to Final Fantasy, now. Typically when I crush a game between my molars, making it a vessel for my rage, I eventually come to believe I have not served you to the utmost. It becomes something akin to exposure therapy, where placing myself close proximity to the hated thing results in a kind of psychological inoculation. Shortly thereafter, I tend to identify with my tormentor, "discovering" or manufacturing a series of "hidden virtues" which were previously "unvisible."

When asked at PAX, I always assumed that my return was inevitable. Not only because it fit my established pattern, but because it was Final Fantasy, and Final Fantasy is a thing which one plays. At this point, I can't discern the point at which it would reenter the rotation. There are too many tiny marvels, to many strange Korean trysts, too many classics, and too many mad geniuses hard at work to bind myself in its service.

One of the three games writers I respect the most has called it good - great, in fact - but I don't have the raw time required to polish this thing until it chooses to shine. I'm willing to play a game for many hours as a purely exploratory exercise, my mind is constructed thus, but (like our primitive forebears) I can only chew on woody pulp so long before I begin to crave some nourishment.

As you watch the continuing exodus from Infinity Ward, there is some information that might help you understand what is going on. It's crucial at the outset to recognize the historical precedent, which is that a company called 2015 created a game called Medal of Honor: Allied Assault, and after they'd accomplished this more or less unprecedented feat, many of the people who had done so left to become a company called Infinity Ward. That was in 2003, and we did a comic based on it.  Watch close; it's happening again.

In Joystiq's interview with Vince Zampella and Jason West, there is a very interesting (if brief) exchange:

So, hiring being the focus of this morning's announcement. Are you actively soliciting your former IW colleagues? Do you expect any of them to follow you to Respawn? Have any of them already jumped ship?

JW: We're absolutely not soliciting in that way. We're kicking off our hiring drive today. We've got our website up. And you know we're excited to get the team together, and we'll announce the information at the appropriate time.

The first part of Jason's response is the important bit. The reason he needs to emphasize it is because they are not allowed to "actively solicit" their former colleagues. The trick, though, and the thing that makes the non-compete somewhat toothless, is that while they can't actively solicit them their former colleagues can approach Jason and Vince to inquire - casually - if there are any jobs available.

Which is pretty funny. Well, not if you're Activision. There is an old story, something about a golden goose; I can't remember the particulars.

you know it's so pathetic