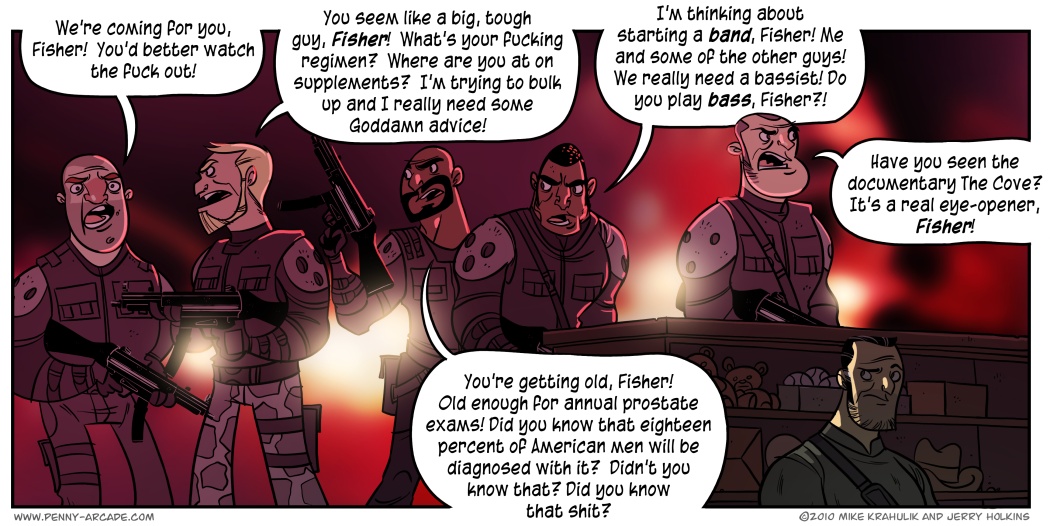 Splinter Cell: Conviction has virtues, and we may even get around to discussing them, but "incessant guard dialogue" is not among them. These people never shut their Goddamned mouths. Ever. Until you shoot them. The new game's emphasis on brutal murder has been decried in some corners, but players will appreciate the ability shut four of these douchebags up simultaneously.

Coverage of the game has been fascinating, though it was always going to be. They boiled the flesh off of a beloved brand, suspending strange new textures and flavors in its thematic broth. The breadth of opinion is precisely where I like it: because it's not a franchise iteration, no mere pull of the lever, people actually have to discuss their experience. And, since only the 360 version is available, we can talk about the actual game as opposed to the copy protection.

Depending on the author, the fact that Splinter Cell: Conviction has instant-fail missions is either dated or a welcome relief. The fact that the screen goes grayscale while in the dark is either an innovation or an aesthetic crime. What's more clear is that many, many people liked hiding bodies, and are sad to see it go. I'd sooner mourn split jumps or inverted grabs, but I understand the feeling. Certainly, I had my favorite places: I was especially fond of walk-in freezers. I was less fond of the "three-strikes and you're out" alarms, or losing in the current section because of something I'd done in a previous section. In any event, I didn't think that Splinter Cell was about hiding bodies, anymore than having dinner is about doing the dishes. That was just something I had to do in order to play Splinter Cell. It was always about Sam Fisher, doing what he does, and so for me this recalibration wasn't especially an affront.

In any case, I vastly prefer the noble experiment over the dogmatic reflex, especially when someone else is paying eight figures to risk a major brand on exploratory work.  I value the urge, even if I don't always like the specific result.

I played through the entirety of the cooperative campaign with a friend, which is a thing I think people should do. The single player campaign is essentially Sam Fisher's diary, in some cases literally: there are times where you can actually read what he is thinking. But this Sam is no longer a government operative, and to the extent that he has an arsenal of whizbang gadgets they're cobbled together over the course of an entire game. You may be surprised to learn that the cooperative portion operates in much more traditional mode: world-class agents tooled to the eyeballs, garbed not in outdoor-dad chic, but dressed in such a way as to make murder more convenient.

I'd never suggest that (upon consuming the demo and finding it wanting) you should go purchase a game on my say so. If you do own it, though, and are wondering if your franchise may be found there, I can't recommend modes like Hunter or Infiltration enough, even when played alone. Turn off gadgets, set it to pistol only, and you may begin to feel something very familiar.