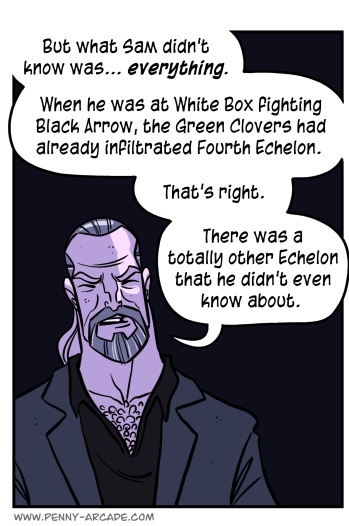 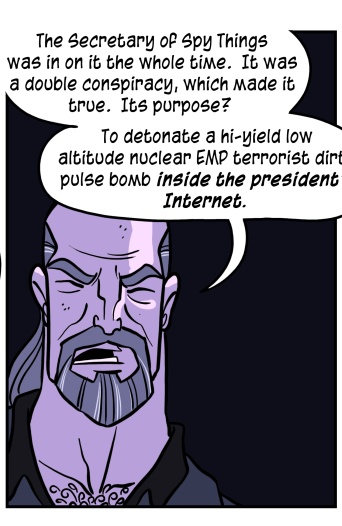 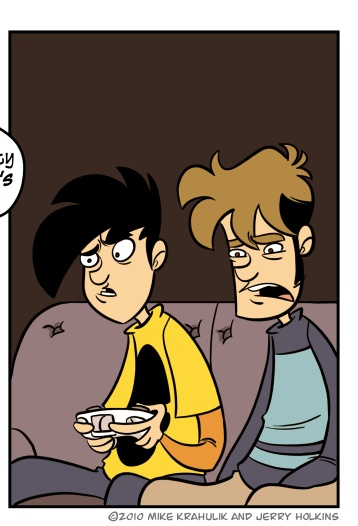 The story in the new Splinter Cell is of the International Intrigue variety, and by the time events have reached their culmination, every serpentine bend of the quintuple cross has been revealed. It's very much a genre, with its own peculiar texture, and Conviction scrupulously charts a more personal course through those events - but there's still plenty of New World Order Shadow Conspiracy boogita-boogita to go around.

I have described the role of the enthusiast community as regards the development process as curatorial, which sounds nice, and feels at least partially true. There's husbandry, also, but then you have to manage a shocking series of mental images. My belief now is that we represent the environment in which games exist.  A developer can create a brand, but they cannot create a franchise - that is our exclusive purview. We don't own it, but we do. The power to destroy a thing is the absolute control over it.

It is very, very good to be on the consumer side of the electronic entertainment equation, and I would caution you regarding any attempt to defect. We can moan about the calcification of franchises, and of the dreaded jungle condition Sequelitis, but if a developer does commit to deep alterations this is also cause for ire.

Of course, if those changes are bad, then we're not talking about something reflexive. The loss of a dedicated and elaborate adversarial mode - like the one pioneered in Pandora Tomorrow, rethought in Chaos Theory, and then gone desperately astray in Double Agent - is a devastating blow. Reading the reviews, it's clear that every person has their own Splinter Cell - the third game comprised three radically different experiences, and each one has its proponents. For Robert and Gabriel, adversarial play may be the series' core virtue. For me, the experience of cooperative stealth took the fore. I'm lucky indeed that they decided my fetish was worthy of iteration.

Ubisoft's cinematic presentation for most games - outside of the playable portions - tends to be pretty not good. There's a lot of pre-rendered stuff that doesn't feel connected with the game proper, often very settled-for or bulk-rate in terms of its execution. Conviction is better than they've ever done on that score, with some genuinely nice setpieces and in general the sense that these portions of the game were actually someone's job. But there are times where the game's long stretch of rough road manifests itself, evidence that it has been more than one game. In its Federally mandated "parkade" level, you can lose instantly if a guard finds a body - but you have no capacity to move bodies. Now, you might say that the "creation" of a body where a person can find it is inadvisable, but it speaks to a gameplay concept that is, at times, in a transitional phase.  But the creature that has emerged from this process, shreds of its leathery egg still clinging, is formidable.  It has incredible potential, and a measure of that potential is on display.

There is a temptation to be politic regarding Conviction, to split the difference and retain the "high ground," but I can't claim any genuine interest in it. I've played the game twenty hours now, or more, and I'm still not finished. Cover is a "thing" now, like mouselook, I miss it when a game doesn't include it - and this is the most credible, dynamic system of environmental maneuvering yet. People tend to think the developer is talking out both sides of its mouth when they describe Conviction as a Stealth game, which I understand completely, because the ability they're always promoting is the ability to shoot four guys in the head at once. But there is a Stealth game here, capital S - a highly novel, extremely challenging one - which is, perhaps appropriately, hiding in plain sight.

from over the rooftop