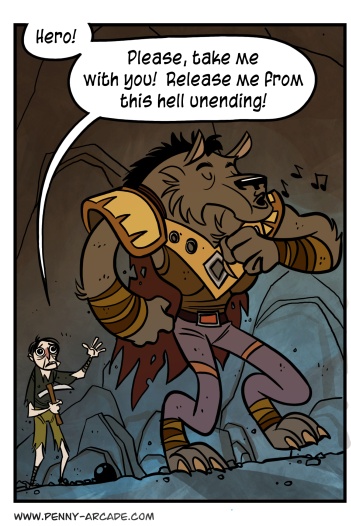 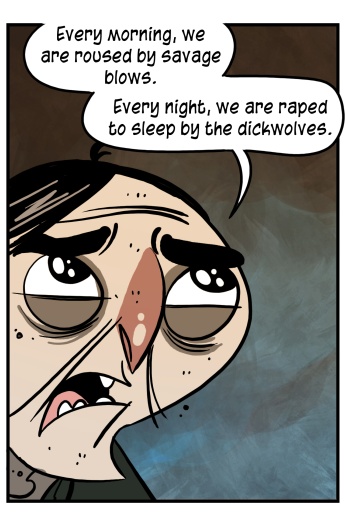 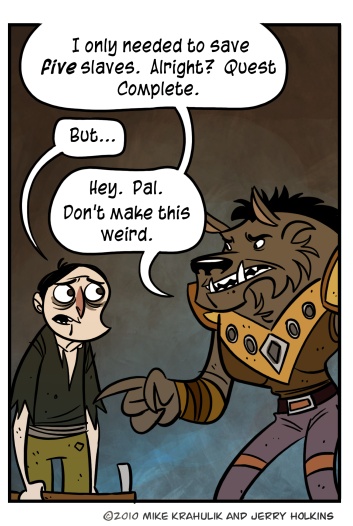 Something that is discussed with some frequency around here is how the quickly an MMO reverts to its default state, ready for the next bus-full of level appropriate tourists to do whatever that zone desperately requires. Whenever something happens outside this cycle - like WoW's phasing (which gets fairly elaborate by the time Cataclysm rolls around) or a dynamic party matching up against a tough public quest in WAR - it's exhilarating. And then you go collect your hooves.

Gabriel told me about a quest he'd done, thought it might make a good comic, and I'm of the opinion that he was correct. MMOs like the second Guild Wars or Star Wars: The Old Republic are attempting, in their way, to make their worlds more coherent: the former is doing so with scaling world events, the latter by breeding the traditional MMO with single-player DNA. Of course, this assumes that nonsense is even a problem for the genre. World of Warcraft doesn't appear to be hurting any as a result of its pragmatism.

I've said that I love to read patch notes, even for games I'm not actively playing; I've never missed a full readthrough of a WoW update, even though I've spent more than a year away. There have been a couple biggies recently - Dawn of War II saw a fairly comprehensive assessment, complete with footnotes that explain particular facets of the decision making process. I never spent as much time as I wanted to with Dawn of War II - I lost my co-op partner - though I've always left it installed in case some celestial conflux reunited my merry band. But Relic is still snipping away on this thing, clipping this branch, tying that one back, and I love watching the numbers dance and sway. I'm glad I gave them my money.

I don't know anything about football especially, other than the shape of the ball, which is unlike "balls" as they have been classically understood. But that's a matter quite apart from keeping an eye on Backbreaker, which tries (as others have) to create a football experience outside the Madden/NFL hegemony. Judging from the demo, their overarching goal was to bring the immediacy and danger of action games into a tactical sports experience, and most people seem to agree that they succeeded in that portion. Inconsistencies elsewhere (none of which I'm qualified to discuss) resulted in a "90" game "released in 65 condition," which seemed to be the end of the dark horse triumphant narrative.

It is rare - exceedingly rare - that a patch truly resolves fundamental game concerns. There are lots of reasons why, but we don't have to investigate them at this moment, because it appears to have actually happened: I read a take on (what is called) The "Greathouse" Patch over at Dubious Quality that is so electric in its enthusiasm that I was compelled to raise a celebratory fist.

my love is vengeance