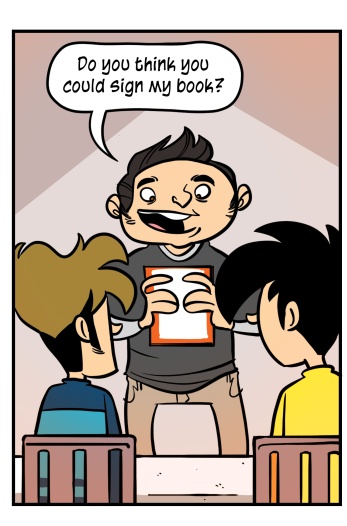 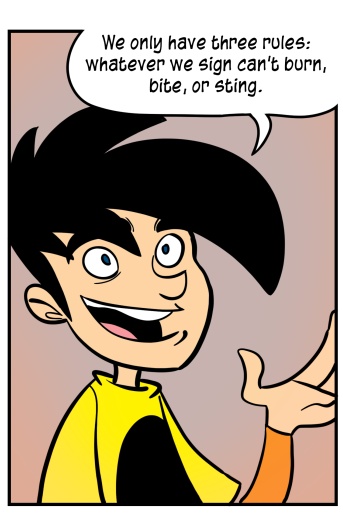 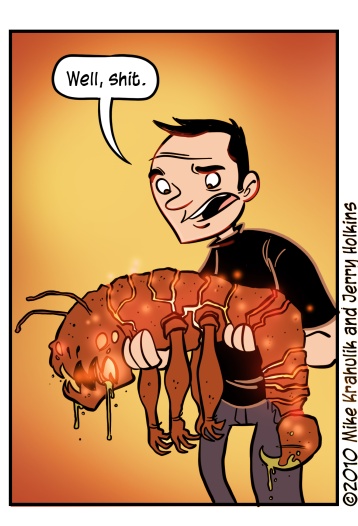 You might recall that during the last PAX on the west coast, I had to leave because (much to my great surprise) a human being was trying to emerge from my wife. I've have used the "nation" metaphor for PAX on multiple occasions, and it's a comparison with value - like Brigadoon, it is a fleeting kingdom. Born during the event proper, she is its princess - and all of PAX her shining court.

Here is the strip we made during Saturday's "Create-A-Strip" panel, with our Signing Rules that you may have heard from our own mouths.  Like all our panels this year, it was just...  fun.  Effortless.  Usually after one of these shows I'm a fucking wreck.  After these last two events, I feel like I could do the whole thing again the very next weekend.

The opportunity to bring the cream of E3 to a venue fifteen minutes from my house is almost too much to bear, it really is convenience itself, and the chance to see the things I've been reading about lately was absolutely welcome. I was surprised to learn that PAX was home to a few announcements, imagining that this year's Surprise Meter had been depleted altogether. We were startled when people from our own show had asked us what we thought about Duke Nukem Forever being playable at our own show, because we didn't know that it was - our internal map for that booth simply reads "Gearbox."  Firefall was another huge surprise, and something that warrants a reservation of attention. As someone who knows Goddamn near everything and has flocks of raven-spies, it is invigorating to learn that novelty is still possible.

Nothing brings me more pleasure than to see a crew from one year's indie showcase return the next show with a booth of their own. I was overjoyed to see that since last I saw them, Fire Hose Games had inked a deal with Sony to bring the clever melange of Slam Bolt Scrappers to the PSN early next year. I played a round and was promptly obliterated, but it was the sort of loss where one learns much, which I very nearly prefer to winning. XBLA darlings Twisted Pixel were awarded a spot in the PAX 10 with The Maw several years ago, and they've been back every show since with their Next Big Thing. It's a tremendous honor. I hope to see this year's inductees for years to come.

I should emphasize that the final round of the Omegathon was a Claw Machine, fixed with a custom sign which read "The Omegaclaw," which I feel really elevated the goings on. You would be shocked - as shocked as we were during our testing - to find just how strategic the game can get over the course of turn-based play with a limited amount of money. During our preliminary investigations, Robert managed the nigh mythical DTP, or Double Toy Pull - a Moogle and a Pikmin in a single gleaming grip - and there were calls from the audience for our competitors to replicate this feat. Mechanically speaking, each toy was worth a point. As a spectator sport, a claw machine delivers world class thrills.

At our final Q&A, a young man took the microphone to thank us for creating the unique PAX community which has drawn him back year after year, but I know something he doesn't: we didn't create that community.  We guessed it was there, theorized it like some mysterious particle, and created the show to verify its existence.  For us, PAX succeeds to the extent that we stay out of your way, allowing that natural allegiance to make itself known.

from your furnace of coal-fired hell