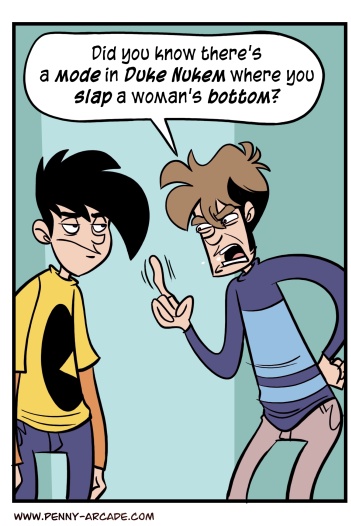 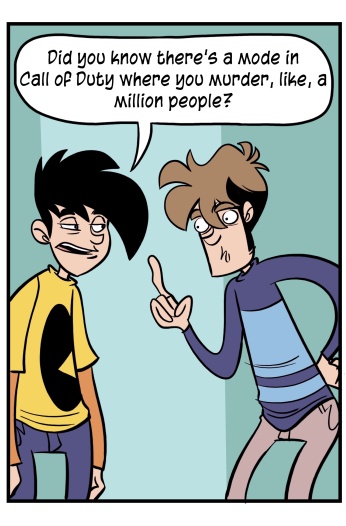 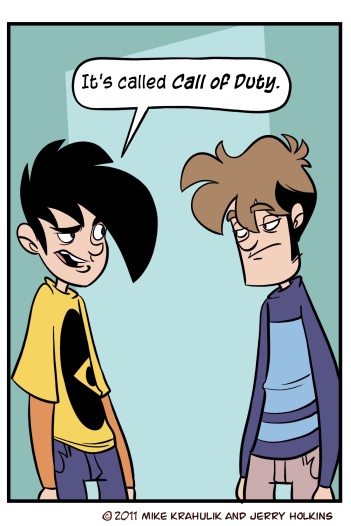 Duke Nukem is no doubt, and no argument, an organism which is guaranteed (indeed, engineered) to be offensive.  So, if we get offended...  does he win, somehow?  Is that how it works?

These days Duke remembered as the game with boobs in it, or is the game about boobs, or is executed by running boobs.exe, or is the one about a dumb jerk. The terrible thing is that, yeah, a lot of it was dumb.  Is dumb.  But while 3D Realms was doing away with taste and chivalry, they also did away with a bunch of other cruft that still clings to the genre.

Consider that "Quake," a game which came after Duke and was considered to be the primary competitor to Duke at that time, did away with manual interactions altogether. You progressed through the game largely via frottage; you simply rubbed yourself against walls and doors until they gave way, either by a scripted trigger or simply through vigorous abrasion. Duke could have been made as a response to Quake, even though it came out before: it had world as tangible, or more tangible, than many shooters today.

Things get more complicated when you start thinking about QuakeC, or native IP support, and then all bets are truly off the first time you entered +mlook at the console. I mean, that's when you knew. But as a design - as a place? For all its interdimensional chaos, you could eat off of Quake. Every molecule was clean.  Duke, on the other hand, was filthy with ambiguities.

Jetpacks. Tricksy holograms. Shrink-rays. I mean, there are entire games based on individual Duke features. Timed detonators! It's like they had access to a different alphabet, and somewhere they are still hoarding those secret letters. Why are all of those ideas in the same game? It's from 1996, and it still comes up in conversation. The Subway. The Bank. Virtually unlimited levels to play on, 20k or less in most cases. I shot Gabriel once with a shrink ray, and he used his jetpack to fly out the window like an insect. Fifteen years ago. Still talking about it, about scenarios that to this day no game has managed to top.

Duke was also made before people were paying regular attention to this industry and its nefarious output; like his brother Lo Wang, he's a creature out of time that has no place in the modern world. But the game did make contributions of a real sort, and charted a very different course, even if you would need an industrial centrifuge to make any part of it pure.

'round the tree grew a vine