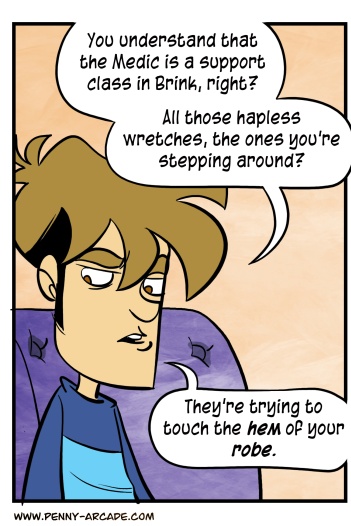 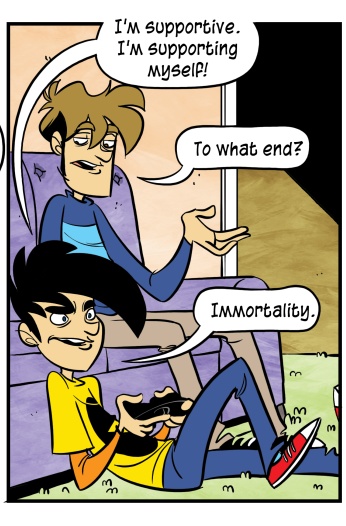 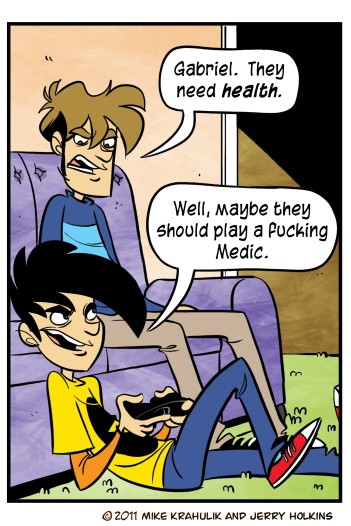 Typically games based on the interplay of classes restrict your weapon choices, but this is something they chose not to do with Brink. Weapons are gated by your survivability and mobility, via one of the three Body Types.  This means that you can set up a huge Medic made of bricks who hauls around a minigun, and nobody can say boo about it. I thought this might help me invigorate my fallen allies; one could also use it to become an undying warbringer.

I want to be absolutely clear on this point. The “one” referred to above is Gabriel. And “could also” might reasonably be replaced with “does, perpetually.”

Brink is a better game than its metascore might imply, provided you can get to that round where every gossamer template of its potential finds alignment. It’s very “designed,” which makes the experience very fragile in cases where its technology fails, which isn’t something you really have control over on the console. Or on the PC, frankly. Which we’ll get to.

It’s certainly true that running back and forth from the spawn point to the scene of the action - wherever that might be at the moment - perfectly captures that Sisyphean hellhole feeling that capture point games can descend into. Where things diverge from the norm is the ring of objectives you can pull up, the unique grammar of its classes, and the incredibly novel sense of momentum. Whenever I find myself running back again and again to form a kind of “corpse bridge” to my objective, it's usually because I haven't considered some facet of this strange triumvirate.

As the shooter of the week, it’s a miss; as Brink, which is to say, as itself - a kind of class-based action platformer - there’s something here.

I wasn’t aware just how lucky I was to be able to jump directly in after installing the game. Part of this is that, as the result of a victorious coin flip at the time of machine creation, I happened to install an nVidia board. Before we move on to the next paragraph, I will give you a few moments to guess what kind of card Gabriel has. It won’t be hard, because there’s really only two kinds.

There were performance devouring grids on every surface of the game, and nobody seemed to know exactly why.  He spent more than an hour installing drivers to a fresh machine, installing a hotfix, until he found a message board thread which claimed that the drivers he’d installed were too new. Then he had to manage a wave of “loving” and “inclusive” behavior from the PC community about what video card was built into his laptop. It didn’t stop him.

You must understand, especially as a long-time reader, how odd this is. He doesn’t seek out PC experiences, and he certainly doesn’t fucking fix computers. But there he was, hauling down the console window with a pinky-press of the tilde, juggling console variables in an effort to own the entire game he purchased. It did my heart good.

I know what draws him to it, because it’s the same thing that draws me: team-based, objective-oriented play, literally from another era - aged ten years in the bottle. He sees the inheritor of the games we played as young men, the long nights of Wolf; meshed echelons of interdependence. He is not wrong; that game is in there. But they have made it incredibly difficult to find.