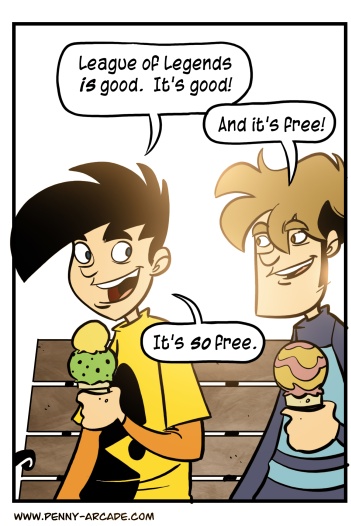 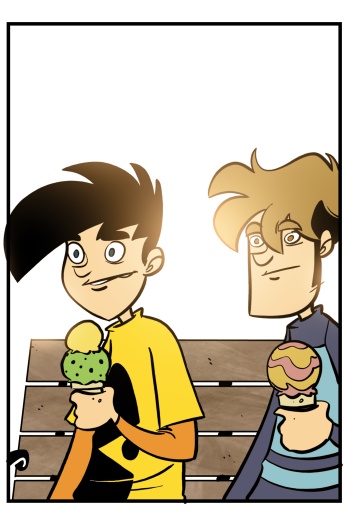 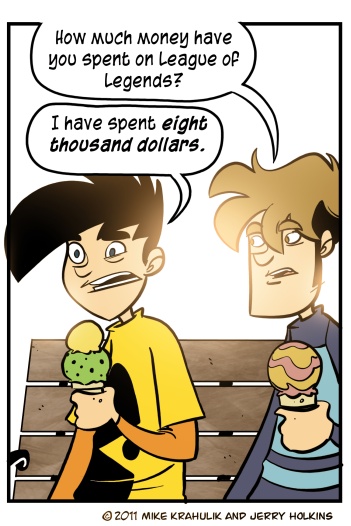 I don’t know what’s happening over here; it’s not like there aren’t games on retail shelves, writhing in agony, awaiting release. But if your favorite part of a game is the Second Hour - the part where you know what's knowable, and must synthesize - Free To Play games are too delicious. I twist them apart, scrape the frosting off with my teeth, and discard the now useless vector.

Kiko and I are the scouts of our group, and for every five games we discover and enthusiastically play maybe one of them truly catalyzes the group. Last night, Gabriel and even Kara got in. Kara! In another era, she was a crucial addition; coronets sang at her return.

I think it’s got one of the more tasteful models for a “freemium” experience I’ve seen yet, one that has you opening a new “booster pack” of playable heroes each week to explore an almost hilariously deep roster. That is to say, I don’t actually resent spending money there. I bought “Riot Points” not because I felt that I needed them, but because the customer service I’d received was so good.  I barely knew how to respond.  I went with money, in this case.

We aren’t entirely sure what to do with the news coming out of E3, vis a vis leaching some kind of satirical payload out of it. There’s lots of n+1, and I’m satisfied in cases like that simply playing them when they come out. The 3DS/NGP thing is following a familiar script, with a Nintendo fielding another Mutant while Sony offers up another brick of congealed Future.

The office went through a torrid kind of affair with the 3DS, based purely on its built-in RPG thing Find Mii, and it’s replaced many DS handhelds not because it had any retail content in particular but because it could emulate their old games and play Find Mii, which is a game about hats.

I have the same relationship with the device that I did with the PSP, which is one where I am constantly trying to find excuses to use it. That’s a matter quite apart from not liking it. I want to like it, but it gives me very few opportunities to integrate the machine into an entire life. I’m hoping the Shop they just dropped in will tell me why I own this hardware.

I bought a PSP last time based on the heft of its silicon and the strength of the Launch Titles, though it eventually fell out of circulation. I bought the 3DS based on its predecessor’s legendary pedigree. I’m not sure either strategy is wholly sound. The correct policy on portables is to wait for the first price drop, something I’m genetically incapable of doing.

here in the still