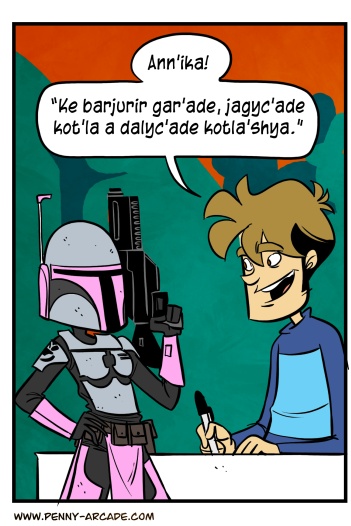 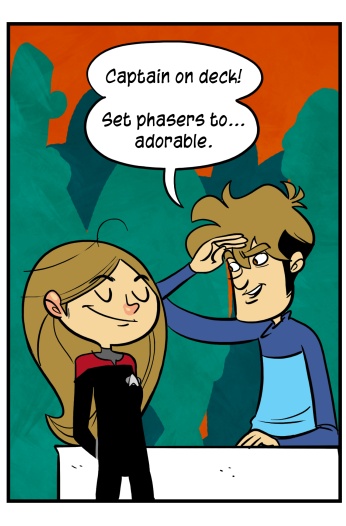 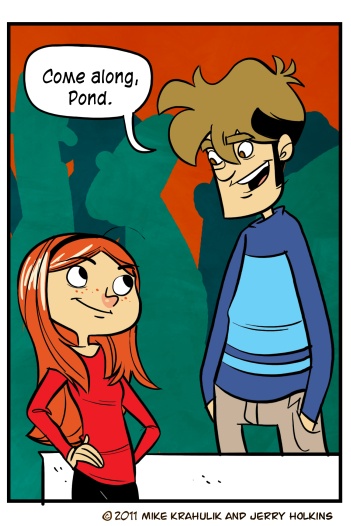 Now you know why the series is called Annservice. I begged Gabriel to end the series this way, because I felt confident it would be awesome, even though it’s a fairly naked supplication of the reader somewhat outside the Gag Strip Milieu.  I especially appreciate him letting me have Panel 3, particularly since he isn’t a fan in the least and may even be the opposite of a fan. Usually that term would mean something like “opponent,” but in this case I think it clearly means villain.

I had half a mind to bring my Xbox down to the show, just to play more Bastion.

I love everything about Narrators, even the unreliable ones, and the game’s exquisite use of this trick - and the gifted actor they’ve slotted in the role - is a Wow Device with the Captivator set at maximum.  His voice is like wrapping yourself in a quilt straight from the dryer. There is much to like about the game; just on the edge of too clever, it’s got sentiment without going twee. Eloquent, demonstrative art. On a primal level, it have nice playings; it fun to hit beast. At the end of the day, though... that voice. The warmth.

Also, it was written by Greg Kasavin, and you know where I stand on the all-important Kasavin issue.

The reason I only had half a mind to bring it is because the last sky-journey I took was inaugurated with direct prostate stimulation. I was pulled out of line at the airport because they claimed to have detected bomb-making residues on my backpack. Brightening immediately, I said, “Oh! You mean, like, precursors?!?” because I never get to use the term precursor and I got excited. The word seemed to tantalize the officer, like a waft of roasting lamb, and that’s about the time he put on the long glove and introduced me to a realm of forbidden sensation. Plus, the newer Xbox just looks sort of nefarious, like a prop in a movie about some kind of dangerous machine. I don’t want to give 'em any ideas.

If you’re coming up (or down, or laterally) for the weekend, and you’re super bored, why not stop by San Diego Comic-Con’s booth 1334? We’ve got some special stuff, but whatever. I’ve got a ready supply of earnest, heartwarming anecdotes that are actually super creepy once you’ve really thought about them.