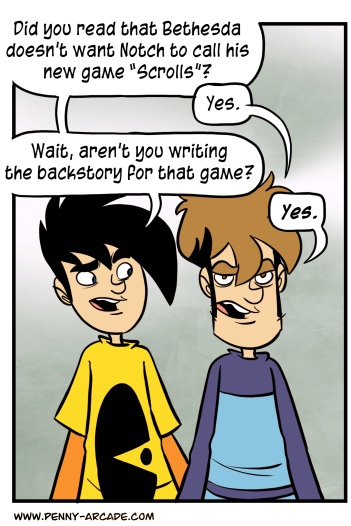 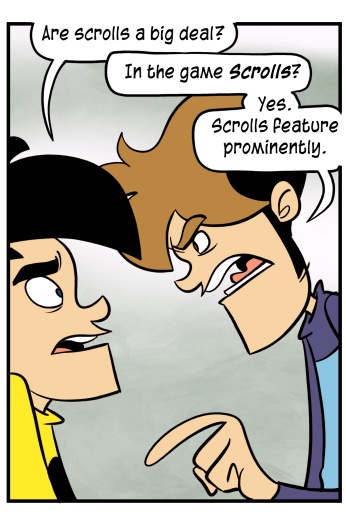 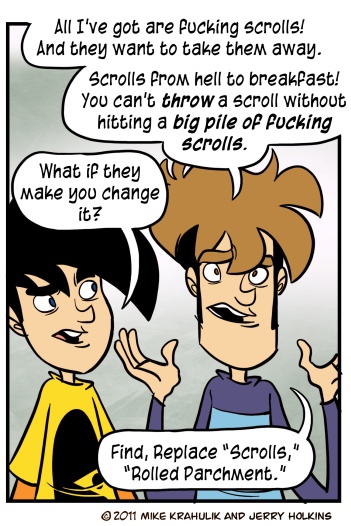 - as an adult
- with all my clothes on
- while not eating chicken satay.

Bethesda is uncomfortable with how scrolly they're getting over there with all the scroll scrolls. Bethsoft has the Elder Scrolls, which are much, much older in the scroll department, and they believe that the age of these scrolls grants them primacy.

Notch, who may also be called Mr. Minecraft, challenged Bethesda to a Quake 3 Deathmatch as a means of resolving the issue, but no word has been forthcoming because this isn't how we resolve legal disputes in this dimension even though it would be totally sweet. I think this is how you should solve all problems.

My reaction to legal challenges is typically to run away, run awayi from the pain, yeah hah yeah ah heah yeah. We once had to pay someone thirty-five thousand dollars because they didn't pay us. That is a real thing, and it happened. Once lawyers get involved all certainties cease. It's no skin off my nose, in any event; I can fix this kind of thing on my end.

Here is something I've never entirely understood; maybe someone can explain the structure here.

So, if we're playing a game, and you defeat me, I'm a gay noob. I mean, this is dumb, but I understand what you're trying to say, which is that I lack the true vigor of an actual man. Also, my inexperience at the game - as opposed to my experience at having sex with men, which is encyclopedic - renders me unable to repel your onslaught, which is sure to be savage indeed. Let's set aside the fact that these assertions are made well before the first encounter, when you have no index of my prowess on any conceivable axis, when everyone is situated in a realm of inexhaustible life and couldn't die even if they wanted to.

When we emerge from the round, though, in the twilight phase between active rounds, your body broken clean in half by my noble order, with your last gulp of rancid air you still call me a gay noob? How does that square with your other shit? Where do you fall in the hierarchy, then? Did I defeat you with all my delicate homomancy? Call me not noob, call me Anoobis; you have entered the realm of the defeated, and you are mine. 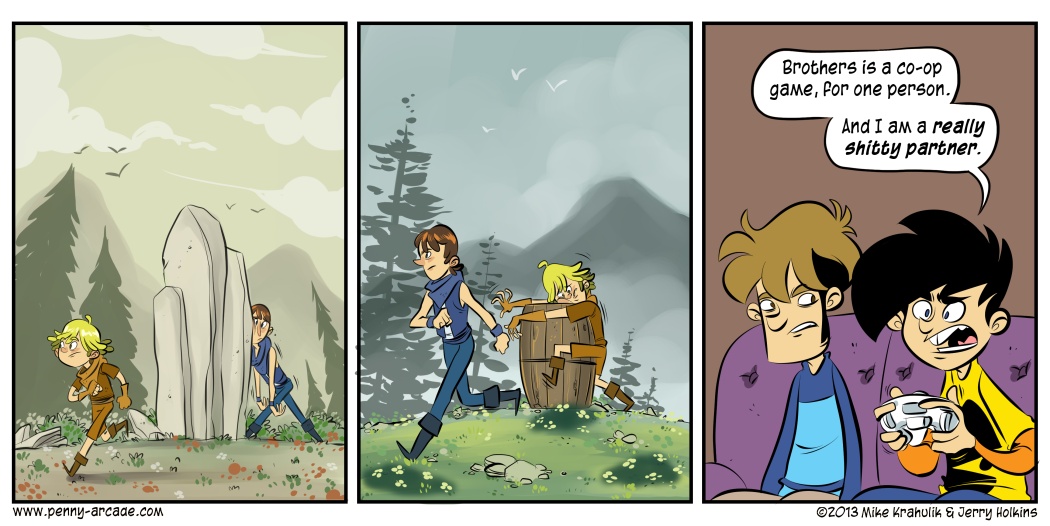