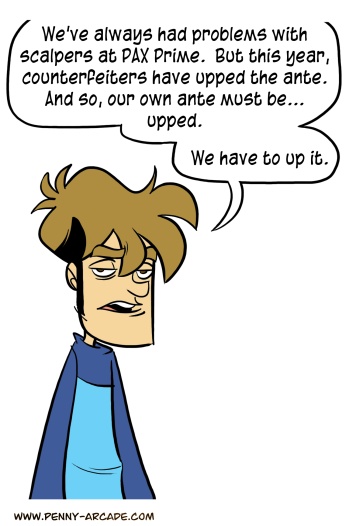 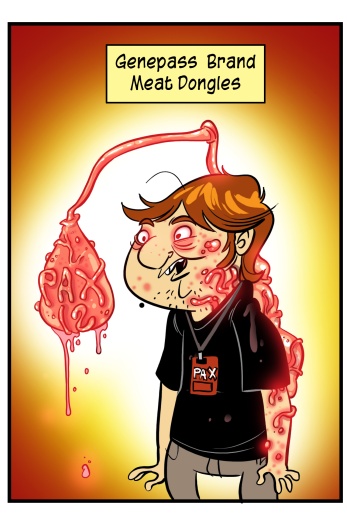 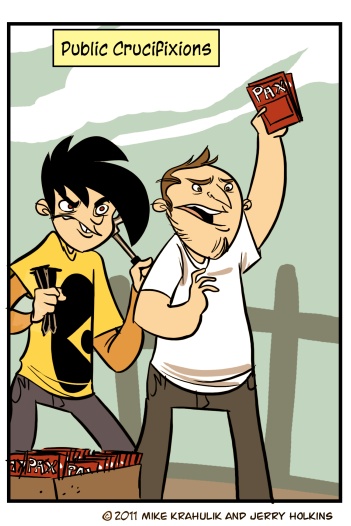 Scalpers will attempt to monetize any well-attended event; the event itself is irrelevant. We've always had trouble with the shadow market for the normal reasons but also because the show consistently sells out. This year, we saw something new: counterfeit badges of substantial cleverness and quality.

More people want to come to PAX than physically can. There were those who thought I was trying to manipulate them when I suggested they should pre-register, but it's not true! I only say that because otherwise you literally won't be able to fit inside the convention center. So what happens when people print more badges than should exist is that they create legitimate hazards.

The fakes are clever, and... qualitous, but it's not impossible to determine their authenticity. I simply must grab the badge off your chest and flex it few times, tugging on your neck, maybe compare this sheet of laminated plastic to a proper one. I could do this while I sneer at you in order to really sell the suspicion. As I said at the show, I feel like the parallels with DRM are pretty solid. There's lots of ways I can assert the primacy of official badges, and most of those ways result in a diminished experience for people who actually paid. Don't worry, though, we are clever; we've got a few things in the works.

I have heard from more than one developer up to their elbows in the API that they have fun working with the Kinect, but that the tools make it very difficult - and this is a startling quote - to create "entertaining experiences." That seems bad! Seems bad.

It's not impossible, certainly - but sometimes you gotta wrassle with it. I was going to tell you that The Gunstringer is an example of a game that is actually fun, and actually funny, as well as simply novel, but since the demo is out now this is an assertion you can test yourself.

I want to see more of Steel Battalion: Heavy Armor - going for a hybrid system of traditional gamepad and IR magical weirdness, it seems like there's a lot of tricks you could pull, even if they don't have any intention of pulling any of those tricks. It takes the original's World War 2 vibration and rides it further, with comparatively low-tech tanks with three-person crews.

The co-op possibilities on a single couch are hugely intriguing: the Kinect doesn't even have to watch the person with the controller, that player's crew could consist of two people on the couch with them. In multiplayer, it could gets even stranger; with your own screen, a Kinect player could poke their heads "physically" out of the vehicle to do rangefinding and target acquisition. They're simulating a crew when they have an opportunity to create a co-op experience with asymmetric inputs that actively affirms the game's thesis. 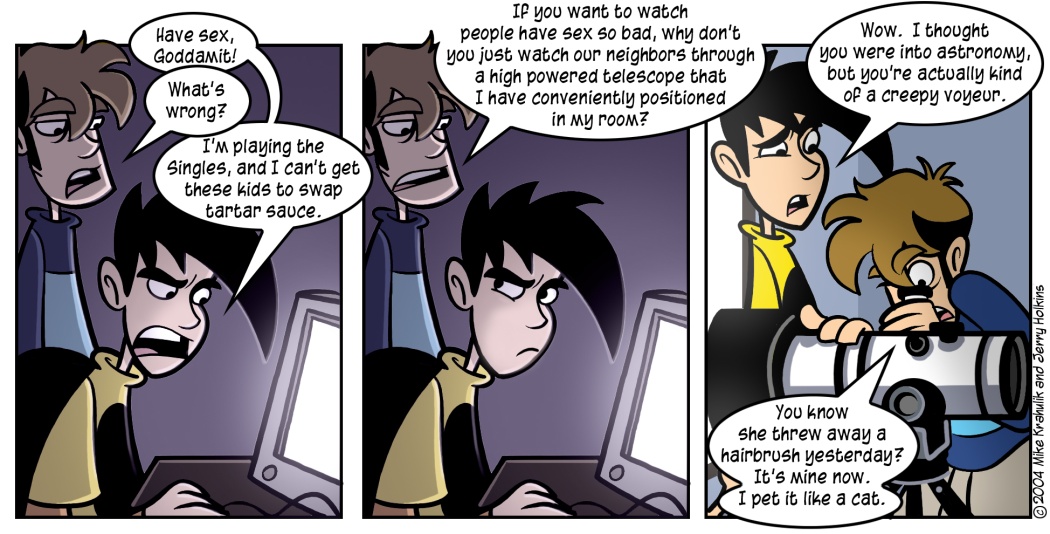