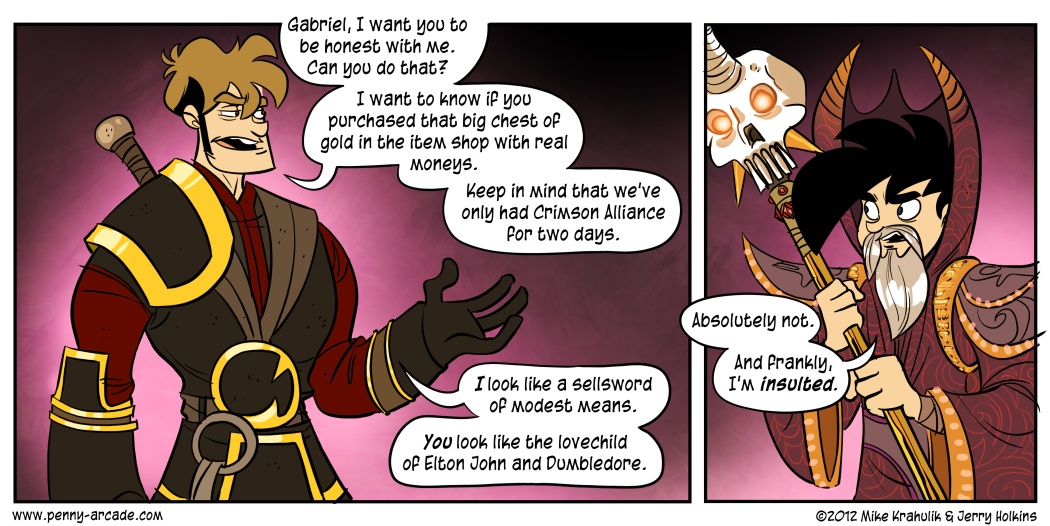 Gabriel and Kara have been investing themselves in Crimson Alliance, investing of themselves and perhaps even of their holdings. They will even farm old levels, trying to use the game's combo system to secure incredible virtual wealth. It's got the hooks in, apparently.

The comparison that generally gets made is to Diablo or Torchlight, but the actual experience of the game doesn't sustain that: its heritage is much more Gauntlet, right down to the color-swapped Wizards. This is an action game that, having been created in 2011, must heap tribute upon the Altar of Progression. This isn't a game where you spend a lot of time twiddling between marginally distinct gear. It may appeal to whatever chittering rodent cortex these other games do, but it's trying to do something else.

The other thing it does, and others have talked about this as well, is that it incorporates some exploratory free-to-play concepts. There's no evidence that it leverages any kind of customized framework for the model, which is supposedly under development at Microsoft and is more or less an open secret. It gets there via in-game purchases, the currency exchange mentioned in the strip, and multiple tiers of entry that I suspect confused a non-trivial portion of its audience.

They call the game's demo the "Full Version," which allows you to play any of the game's three classes in an early portion of the game. You can purchase a character for use in the entire campaign for ten dollars, which might make you think this was the first thirty dollar Xbox Live Arcade game, but you can purchase all three characters at once for fifteen dollars. That's the normal price for a game these days, so it's unfortunate that they didn't tread more boldly in their experimentation.

We play wargames on Mondays, Warmachine is what we're into now but I've played (and invested) in my share, and paying for only what you play with is the norm in that context. Maybe that feels weird to most people, but it goes hand in hand with the commodity/service obsession that's asserting its dominance.