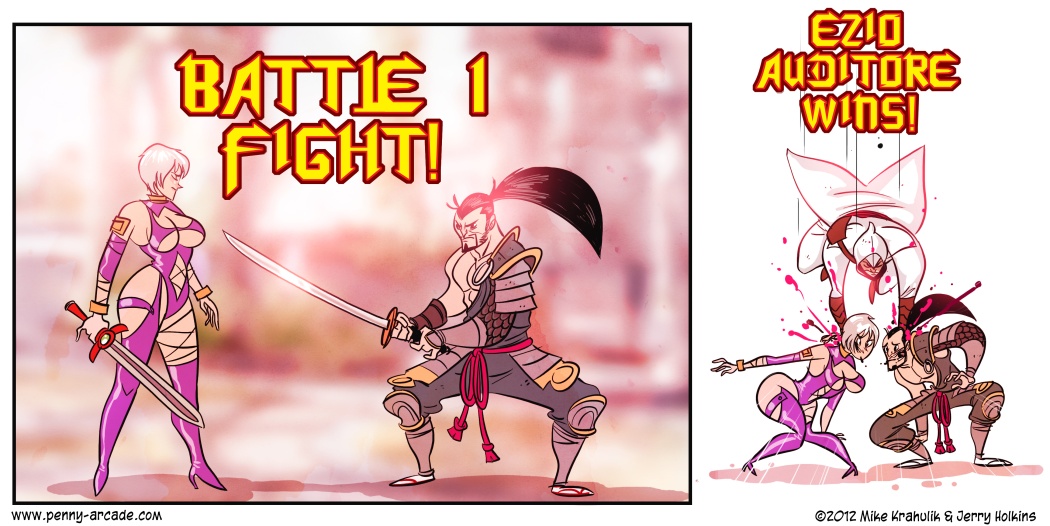 The "rumor" is that the protagonist of the last three Assassin's Creed games - Ezio Auditore de Firenze - will be making an appearance in Soul Calibur V without a trip into the character creator. I only maintain this "rumor" narrative because I know all about them 'shops, but he's a perfect fit and it would be crazy not to have him in there. They did Link for Chrissakes, and he's not even from our planet.

Soul Calibur IV was only just unseated by Ultimate MVC2 in the office, it was played forever, to something approaching a stalemate. We used to go to an arcade called Wonderland in Spokane to play Soul Edge, the progenitor of all this madness. Somebody bought it and changed the name, but I don't remember what to - we called it The Cyber Java Monkey Hut because the new owner couldn't figure out what kind of a business he wanted to own, even though he had ostensibly just purchased one. We spent so much time there that Gabriel drew one of their mascots on a lark, and when he brought it in with us one day, the owner-entity offered to let him paint it on the wall. The payment he offered for this service was that Gabriel would be allowed to paint it on the wall.

Until the next time I see fit to discuss it, this is the last time I will discuss Review Copies. Maybe it will be the last time for reals! That would be nice.

There is an article on Kothulu about how miserly Electronic Arts is with review copies of games it has spent millions of fucking dollars creating and ceaselessly promoting. The example they give is so rudimentary as to fade into the background of the PR continuum. This is not Evil, capital E; this is the pattern on Evil's shower curtain.

The purpose of a review copy is, as we have suggested before, to sell the game>. It is a promotional expense. They are rolling the dice when they offer one up, but it's not excatly Vegas odds: the result is a function of their influence in toto, via advertising, carefully groomed media, and "perks" like trips or free games. There are some outlets - like Kotaku - who have sufficient reach that the risk is worth it, because not granting access would be a greater harm. You can see that in the last line of the article, which exposes the spine of the entire structure.

One can leave this arrangement anytime they like by purchasing their own games, and writing to nobody on Tumblr. You stay because you like the arrangement. These little strains on the leash are performance art, and you may be sure that they tantalize your master; they are like the dance of a fish on the hook. They do like a bit of fight in 'em; softens the meat.

the nature of my game