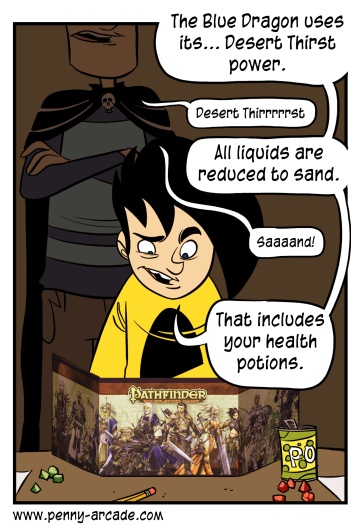 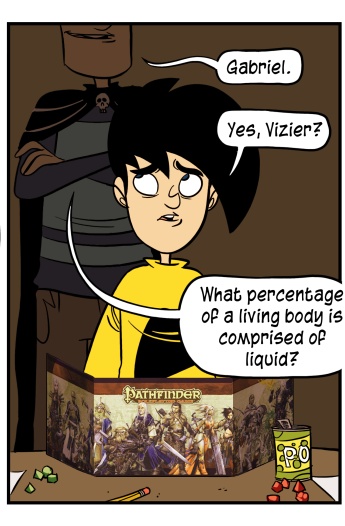 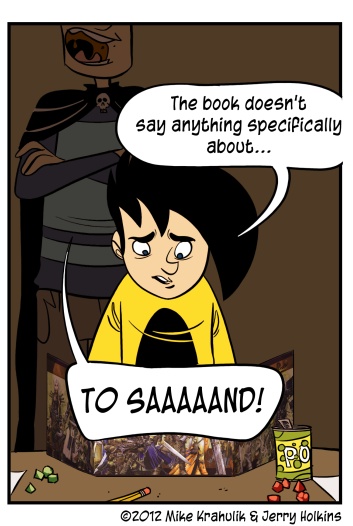 There is a Typo (which Gabriel calls a "Tychpo") in the strip, which Gabriel is refusing to fix because I must "learn." It is philosophically of a piece with grinding a pet's nose into the fibers of a fouled carpet. I will see what kind of genuflections are required to make the comic whole.

What we are hearing from longtime players of Pathfinder is that they, too, run into the same Wall Of X when it comes to creep - four or five smirking demigods enslaving the system, warping it like an event horizon. This has only widened the search pattern for us, delving into what is sometimes termed Fourthcore - aftermarket dungeon philosophy designed to curb these nascent world-eaters.

Perhaps horrified by what we might be setting into motion, Kiko came in yesterday to tell Gabriel that whatever crisis of faith might be happening behind the screen, the players are having a blast. They are the end purpose, right? They're enjoying it. But moving into the third act, it's clear that Gabriel is exhausted trying to maintain the energy of his earlier successes. It's time for a change.

And I think we're getting close.

I recognize that Modern Warfare 3 is beyond vile, and that liking any portion of it - even in private - is to swear fealty to an immoral and undying reich. But Kill Confirmed is hot to death, the kind of wrench twist that alters every variable, and deserves a moment.

This is the sort of thing a Mod would have brought us, in another era: the change is simply not vast on the surface, especially when taking into account the interplay of every other system the game offers. It's Team Deathmatch, essentially. All it does is replace direct scoring with delayed scoring, by creating a "dog tag" on death that must be picked up in order to earn the point. So simple. But now, every potential point can be used as a trap for enemies, and you can grab your friends' tags and deny kills altogether. It has the effect of ablating a sniper's ranged dominance, and it heavily emphasizes group movement to collect and minimize enemy collection. We don't play any other modes, except on accident. If that happens, we quit right away. "Whew," I'll say. "Dodged a bullet, there."

my blood will thicken