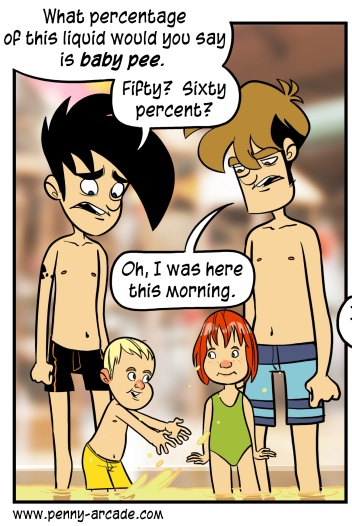 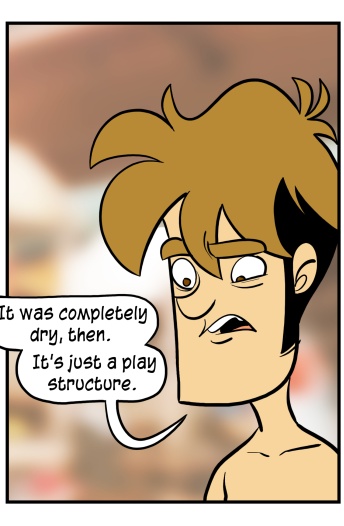 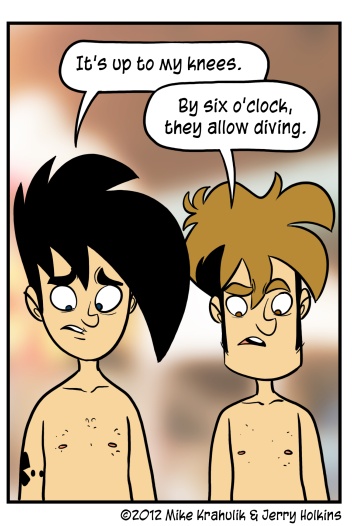 We usually try to go somewhere after a PAX, and we do, but after the last PAX East retreat it became clear that Penny Arcade is made up of Young People on one side and Families on the other side, and young people are feral as a category. It wasn't a good match; with our new Separate Vacations technology, they can go to their rave parties and puff on cheeba while we can go about the business of creating a lasting culture. Gabriel had gone to something called a Great Wolf Lodge at one point, and did not die, which seemed to recommend it as a destination.

He did tell me some stories about the kiddie pool though, specifically its ratios, that might give a father pause. I have a full-body latex sheath I purchased for another purpose which might come in handy.

I don't want to become the Kickfather people come to in order to make their nut; requests to do so have grown to the point that some sites have had to create specific policies related to their promotion. There's Wisdom in that, and maybe I'll need something like that at some point. Some of these Kicks have bigger problems, too. I've already had to talk one potential group down already, just last night. I don't want to be in the dream crushing business either, but some dreams are self-crushing, and it's not always easy to see that from inside.

What is consistently startling to me is the breadth of uses people put the service to. Sometimes the service acts as a microinvestment platform, and sometimes it's a fairly traditional preorder system. It's bizarre. You are aware that I'm obsessed with David Sirlin, and the Kickstarter he put up a few days ago is already funded at two-hundred percent. The pledge per user, an interesting statistic I like to track for some reason, is very high. What's different about his pitch is that unlike many speculative projects, the game he's offering is already complete and rigorously tested: he's essentially holding the game hostage. Here, Kickstarter is being leveraged to ablate production risk.

Then you have projects like Republique, which are simply too beautiful to live; I mean, that's not getting kicked, right? Unbelievably professional pitch, strong concept, but this is the opposite of a Kickstarter, and might actually be a Kickstopper. I saw people playing a card game called Legend of the Cipher in the Tabletop room at PAX. There's an alternate system for resolution as well, but in the base game people literally freestyle battle raps to determine success. That was put up two weeks ago, but it hasn't seen much movement.

Kickstarter is cool, I'm "down," but people somehow managed to create things before Kickstarter. I can't stress that enough. Especially in light of some of these improbable victories and the Overthrow of the Industry Hierarchs, the possibility of disillusionment for creators is at an all time high. Sometimes you have to throw your life away, and pay in blood. I recommend that you do this while you're young, and can still subsist on a slurry of Ramen packets and urine.

when are you going to land