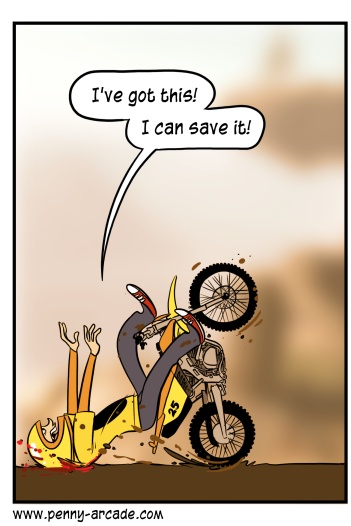 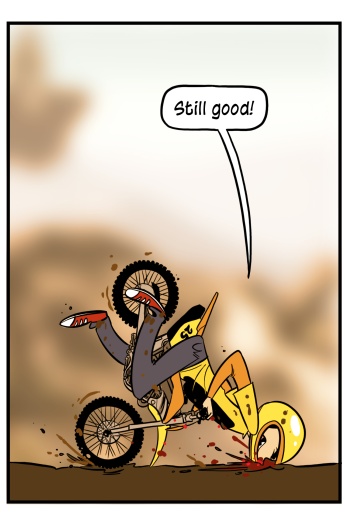 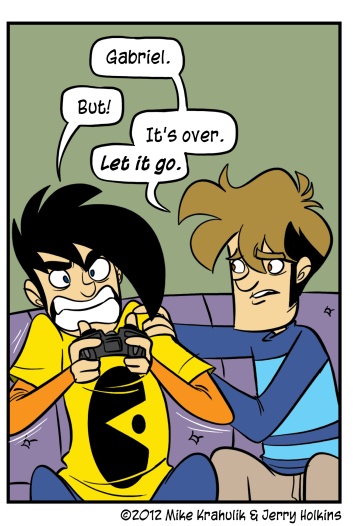 I've played a lot of Trials already, like, a lot; mostly during a period where Gabriel did not use computers for games which were not Massive and/or Multiplayer, so he had no idea what he was getting into. For developer RedLynx, Trials is more genre than specific title: I own three games from them, make that four, and they are all very... trialsy.

As a game which every person owns and/or for which there are many demos available, telling you about the manifold virtues of Trials Evolution may not be an incredible time investment. Suffice it to say that it's a proud entrant in the "one more run" school of Microscale Performance Optimization that transforms your Friend's List into asynchronous competitive content. Robert and Gabriel were passing the controller back and forth every ten runs, and I think Khoo put it best. He doesn't want to give up the controller, but when he does, he's relieved. It's demanding in a way that many modern games are afraid to be. There is always a slight pressure being applied to the trachea.

What gives the game its throbbing immediacy is a physics simulation of sufficient nuance. You can "play" with these physics in ways that are incredibly challenging slash profoundly satisfying, two factors with a recognized bond. But it also creates the weird scenarios such simulations are capable of, and this coupled with the bizarre elixir of destiny and amnesia your seventieth attempt brings on results in a kind of madness.

It does work, on occasion. Not enough to rely on it. Unless it does work, in which case it feels inevitable.

5th Cell - also known as the "Scribblenauts People," though I was partial to Lock's Quest m'self - are making a shooter for some reason. Every game they make has been incredibly fruity in some way, and I mean fruity in the best possible context, like in a way that evokes a delicious, literal fruit. The idea that they have something to say about the most calcified genre in existence was intriguing to me. I told Jeremiah Slaczka as much, actually, after it was first announced. Most people didn't quite know what to make of it. This would have been last year about this time, and it's been almost completely invisible since then - perhaps for that very reason.

I asked him what they've been doing, and the answer seemed to be "lots." The persistent World Map that informs each round was redesigned. What little ground movement the game did have was stripped out, replaced with new flight and cover selection mechanisms. Additional frames were found, here and there, so many that they were able to maintain sixty of them per second.

Okay. So, now we have a 3v3 shooter with no ground movement where people fight (somehow!) in an ongoing, global conflict. Is it any good? I don't know. But before I gave a bunch of codes for it away, I took one for myself. And I have every intention of finding out. 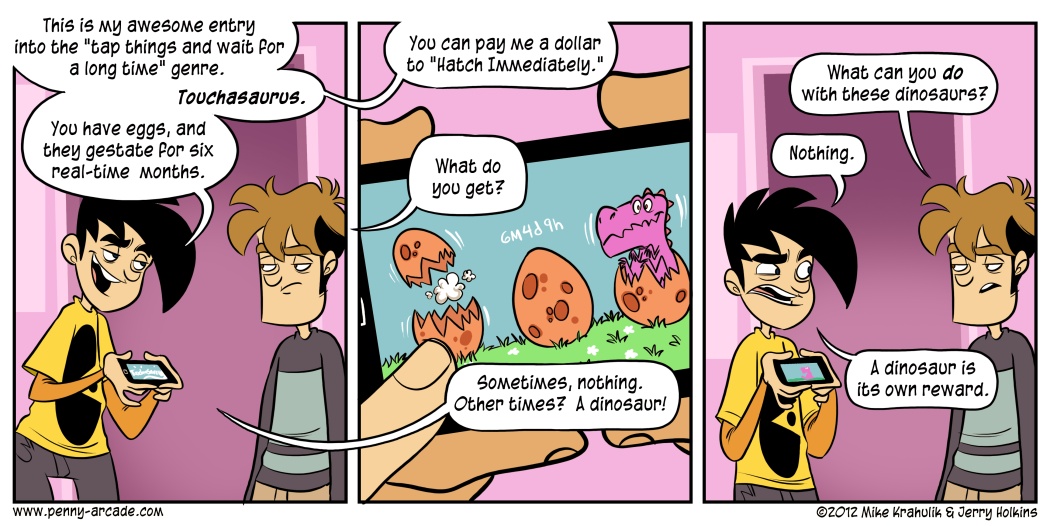