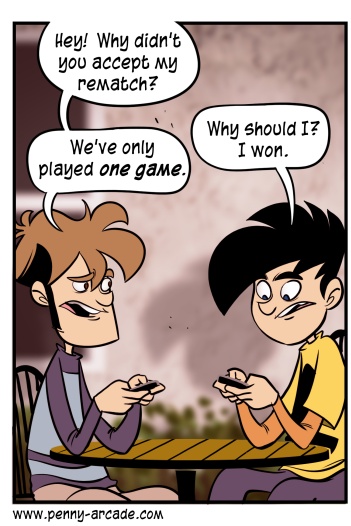 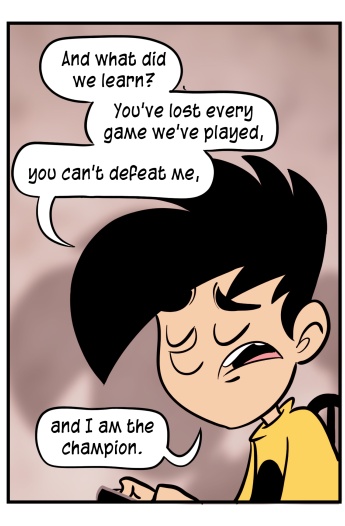 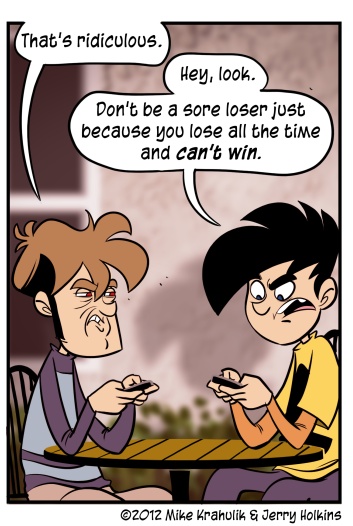 Functionally speaking, the comic is about Hero Academy but we may expand the viewport to include the entirety of our whole entire relationship and these sweeping arcs are retained.

I don't mind losing, and to a certain extent expect that I will, because I play with another victory condition: to learn and understand. I can lose and still win, which is good, because I'm well acquainted with the former. I received a lot of "sportsmanship awards" as a youth, and I have oriented my entire being around this. Of course, this process is predicated on my ability to play a game more that once. Gabriel's ability to defraud me of life pleasure is a way for him to win twice in any encounter, a system which allows for the possession and consumption of a cake simultaneously.

I don't know how it happened, but Gabriel ended up at a table playing Mouse Guard with the creator of the game. "Welcome to PAX," as they say. He was with his niece, Ben for some reason, and Kiko's wife Vizelle who took to it something fierce. I needed to talk about something else on Friday, but let's get to it now.

It has more dice than the more experimental "indie" rpgs I'm familiar with, and has some familiar systemic shapes, but it quickly becomes clear that the entire purpose of these old structures is to incubate the new.

There is a Luke in that gutted tauntaun, sapping its warmth.

Mouse Guard is that incredibly artful tie-in that validates what is ordinarily a gruesome and mercenary form. Based on the extant Burning Wheel system, with a clear mission of biblical reverence to the setting, it's beautiful simply as an object before you have any intention of play. As I said earlier, learning is playing for me, so I try not to rob that from other people. That explains the vague, useless poetry I frequently leverage to confound you when what you might want most is hard fact. But the thing Gabriel found compelling, and what you may find compelling too, is a unified system for resolving conflicts.

You may be wondering what kind of conflicts, and that is a reasonable question. The answer is all conflicts, ever. Using a bank of four Actions with special relationships to one another, there is nothing you can't figure out. The stat you might check against changes, and the situation informs the difficulty, but a single cauldron you can hurl players into and season to taste puts the focus on what they want to do, which is a pretty good place to put the focus.

i've been a nasty