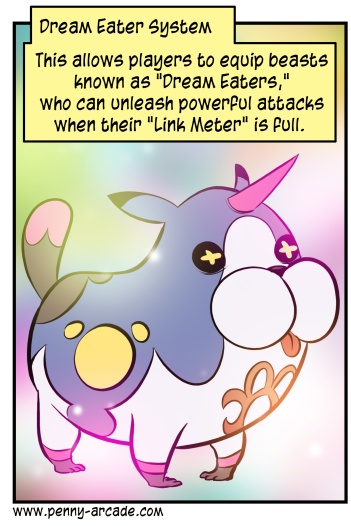 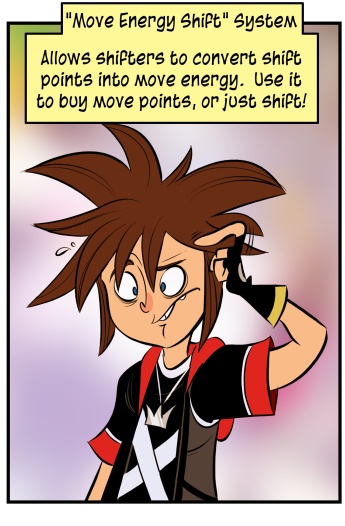 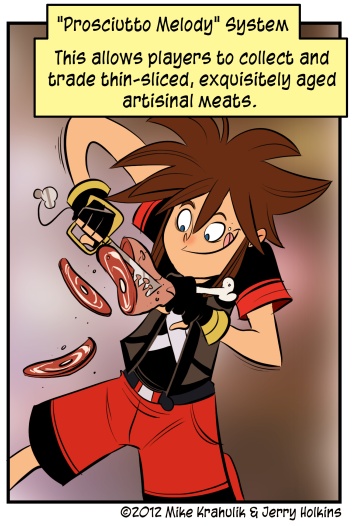 It is difficult to talk to Gabriel at the moment, as the lion's share of my conversational attempts are directed to "The Hand." His focus is on the 3DS, specifically on the game that is in the 3DS, even more specifically Kingdom Hearts: Dream Drop. His relationship to that device is fraught, as I've desribed repeatedly - but it's the first time he hasn't complained about it and has found the 3D a boon. That feature is annoying when its implemented in a merely nominal way, but it's most annoying in a game that simply isn't enjoyable; a game that no amount of spatial wizardly could improve. Many such games exist.

"DD" is full of meshed systems, though, ones which it took him awhile to explain, like craftable "dream eater" "creachoids" that do "this and that type of shit." We took it upon ourselves to detail some of the more esoteric mechanisms to assist your savorance of their richness.

There was an authentically hilarious slab of unintentional theater at Kuantico yesterday entitled "Gaming's Biggest Problem Is That Nobody Wants To Talk," which can reasonably and with increased precision be retitled, "Why Wont Game Industry Professionals Willingly Feed Their Hand Directly Into My Career-Pulverizing Chipper Shredder." It conflates a plea for the furtherance of his own livelihood with some kind of democratized info utopia. These fucking people.

They are talking, though. They talk constantly. They're just not talking to you, because they don't trust you - or because they're legally restrained, or restrained by the wisdom of another's personal experience. An errant - read, "honest" - word becomes your entire story. Speech in presumed confidence or among fellow professionals is fit to broadcast. They cannot, will not, and must not put the fate of multimillion dollar projects in your greasy fucking clutch. The examples he gives of people doin' it rite is an exercise in myopia. Tim Schafer, Notch, Cliff Bleszinski, and Gabe Newell can afford to be frank because they either own their companies or are brands in and of themselves, functionally unfirable. This is literally the speech and conception of a child.

Dialogue is founded on trust. For the purposes of this conversation, the game industry is the Monk. And the Journalist - very specifically the kind of belt-fed, high ROF ejaculation engine he's party to - is the Scorpion. Historically speaking, Scorpion Advice is probably something you can do without.