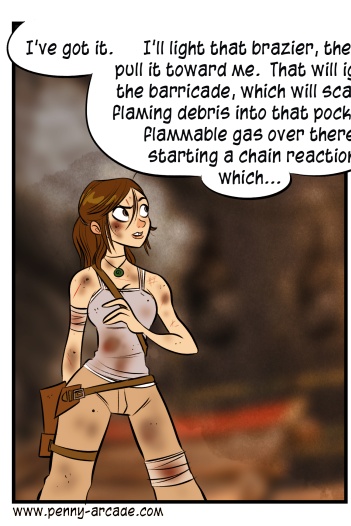 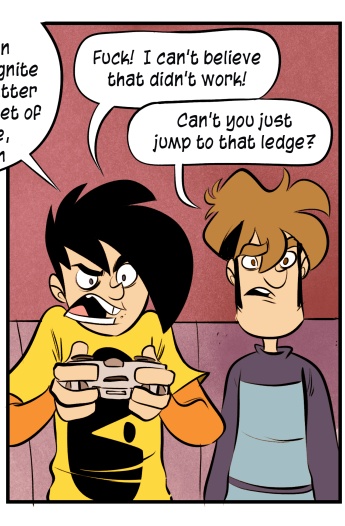 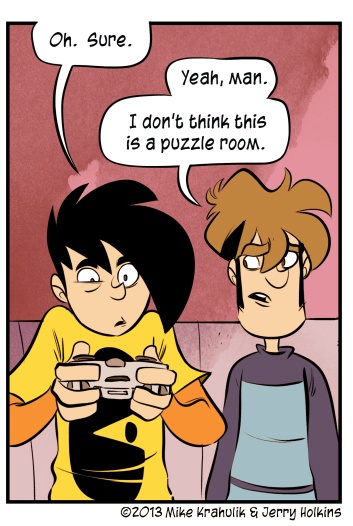 The situation depicted in today's strip isn't confined to this Tomb Raider, or any previous Tomb Raiding excursion, which was one of the things that recommended it conceptually. That said, it's especially present here, with that combination of incredibly high graphical fidelity and physics puzzles that make the brain flip and roll inside the skull.

After a few hours scouring optional tombs and dealing with the omnipresent issue of muhfuckas, your mental apparatus is on fucking fire. I've described this aspect of mind preparation alongside our Professor Layton strip as trying to cultivate a headspace like a model garage. Those puzzles don't tend to have the scale of a Tomb Raider, though - you might freewheel some, but you're mostly looking at a very specific puzzle in an environment designed for you to solve that puzzle. You know when you're doing one. Here, occasionally determining where the puzzle is is part of it. You just have to open up your head sometimes, and see what falls in.

I will occasionally see a puzzle in Tomb Raider that reminds me of Lara Croft and the Guardian of Light, which (if you are wondering) is the best possible thing. I won't spoil the specific puzzle we were thinking of - it's the one right after you get Helgumund's hammer from Jrorf. Hereafter truncated to GoL, Guardian of Light was one of the best cooperative games I've ever played - it's one of the best games I've ever played without any qualifiers, in fact. When they said that GoL had inspired their multiplayer, I felt my face flush; she clearly has a crew with her in the game. It's not hard to get from there to a kind of gritty Maniac Mansion + Gunplay, where we broaden at once the types of puzzles and the type of experience we can have. That's the sort of thing I would buy a "season pass" for. What you do instead is shoot strangers in multiplayer arenas, which is about as far from Guardian of Light as it is possible to get.

We were talking with Robert yesterday about what Kickstarter is as opposed to what people think it is as opposed to what people use it for, and a Kickstarter to make a Veronica Mars movie was so timely that I had to mention it. Is this what it's for? If the result is an actual, real Veronica Mars movie, then I don't give a shit.